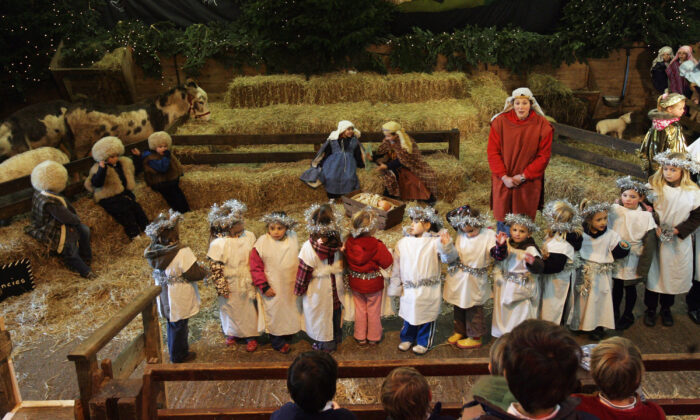 Transport Secretary Grant Shapps said on Friday he believes Christmas events should resume this year after a number of schools cancelled their fairs and nativity plays.

There are other schools that will put on nativity plays, but decided not to let parents join the audience.

Asked whether or not the plays should be canceled due to the CCP (Chinese Communist Party) virus, Shapps told LBC radio “‘Let the nativity plays play on’ is my view.”

The transport secretary said people in the UK did not go through “two, now three rounds of vaccination and everything else” to have to spend Christmas as they did last year.

“So of course, steps will be taken, and no doubt to make them as safe as possible ventilation and the rest of it. These people should be able to get together,” he said.

Downing Street later said it’s up to schools to decide on the matter, but the current government guidance doesn’t have any restrictions on events.

“We have set out our guidance to schools that states they can continue to hold events where visitors such as parents are on site, which includes things like school plays,” Prime Minister Boris Johnson’s spokesman said.

“Our guidance is clear there is no limit on group size for these events either indoor or outdoor. But ultimately it is a matter for individual schools,” he added.

Last year, parts of England spent Christmas in full lockdown, while people in other areas had only Christmas day to meet their families from up to two other households, due to the emergence of the alpha variant of the CCP virus.

The UK on Friday banned direct flights from six southern African countries as a precaution over a new variant of concern.

Ministers and scientists said the variants can potentially spread faster and evade immunity, but it will take weeks to test the hypothesis.

Asked why the UK government banned travel only one day after the variant was detected, comparing to the 22-day gap between the detection of the delta variant and the India travel ban, Shapps said the government had previously worked “to the timescale of the World Health Organization.”

The new variant was detected in two of the six African countries that the UK added to its red travel list—South Africa and Botswana.

Health Secretary Sajid Javid told MPs on Friday the other four countries—Eswatini, Lesotho, Namibia, and Zimbabwe—were included as a precaution.

Javid also confirmed that no restrictions are being reintroduced in England, but warned that “if we need to go further, we will.”

Belgium said on Friday that the new variant, currently identified as B.1.1.529, was found in the country in a man who returned to Belgium from his holiday in Egypt on Nov. 11.