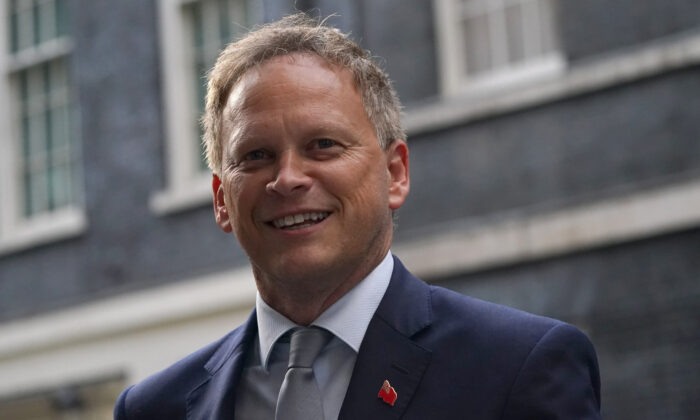 Shapps said the queues and closures at fuel stations were a “manufactured situation” created by the Road Haulage Association (RHA) leaking comments from BP bosses about supply concerns.

The government announced a temporary visa scheme that will see 5,000 HGV drivers and 5,500 poultry workers brought in on three-month contracts to keep supermarket shelves stocked with turkeys and tackle fuel delivery difficulties.

Shapps admitted he had done something he “didn’t necessarily want to do” in allowing foreign workers to fill the workforce gaps, having only on Friday rallied against the idea of temporary visas, but said the government wanted to reassure the public amid long queues at the pumps.

Speaking to Sky News’ “Trevor Phillips” On Sunday programme, Shapps said: “We need to ensure that people are reassured now that this rather manufactured situation has been created, because there’s enough petrol in the country.”

Asked who manufactured the situation, he said: “There was a meeting which took place about 10 days ago, a private meeting in which one of the haulage associations decided to leak the details to media, and that has created, as we have seen, quite a large degree of concern as people naturally react to those things.”

He later told BBC One’s “The Andrew Marr Show” the briefings were “irresponsible.”

The Cabinet minister called for the public to be “sensible” and only fill up their cars when needed as there is “plenty of fuel” available.

Meanwhile, Shapps told the Mail on Sunday that Brexit was a “relatively minor contributor” to the shortage of truck drivers in the UK, despite the RHA estimating that Britain’s divorce from the European Union led to an exodus of 20,000 hauliers.

Pointing to shortages caused by the coronavirus pandemic elsewhere in Europe, the Transport Secretary told the BBC he was confident his offer of 5,000 visas would ease the “100 to 200” shortfall of fuel tanker drivers, as he predicted the pump queues would start to “resolve” themselves partly due to the difficulty in stockpiling petrol.

But the boss of the European Road Haulers Association, which represents more than two-thirds of trucking companies across the EU, said he did not think the offer would send drivers flocking back to Britain.

General secretary Marco Digioia, who called Brexit the “number one” reason for UK sector vacancies, told the i newspaper: “Until the UK offers the same pay and working conditions as drivers have in the EU then many will stay away.”

Kate Martin, chairwoman of the Traditional Farm Fresh Turkey Association, predicted there would be a shortage of turkeys available this Christmas which she said had “100 percent” been brought on by Brexit.

“This situation with turkeys is caused by the fact that European labour is no longer available to us,” she told PA.

Retailers and business groups have joined in criticising the scope of the package of measures announced by the Department for Transport to alleviate supply pressures, with the British Chamber of Commerce likening it to “throwing a thimble of water on a bonfire”.

Labour leader Sir Keir Starmer suggested he would support enough visas being offered to fill every vacancy in the haulage industry.

Asked on Marr whether he would support bringing in 100,000 foreign drivers to match the shortage, Starmer said: “We are going to have to do that.

“We have to issue enough visas to cover the number of drivers that we need,” he said.

Shapps said visas were “only one element” of the state intervention, with ministers planning to train 4,000 more lorry drivers, while the Army has been drafted in to provide extra HGV driving tests to reduce the “bottleneck” caused by the coronavirus pandemic shutdown.

Nearly one million letters will also be landing on the doormats of people with HGV licences in the coming days enticing them to return to the job now that wages have risen.

The government is also keen to see better conditions in terms of truck-stop facilities.

By Patrick Daly and Laura Parnaby