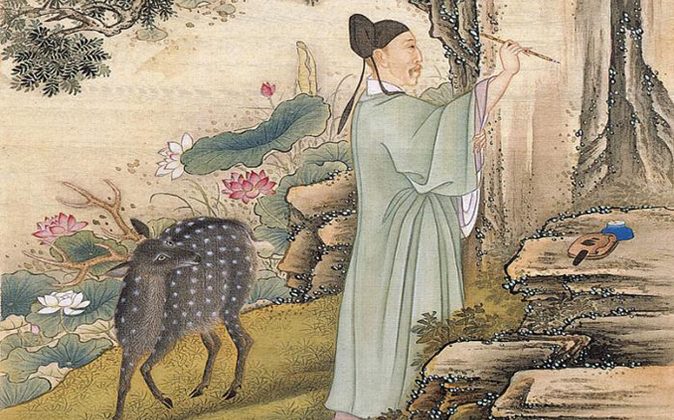 The ancient Chinese, like modern psychologists and physicians, regarded good posture as a key to maintaining physical vigor and spiritual health. According to traditional Chinese medicine and philosophy, your stance and gait play not only a significant physical role, but reflect your inner character as well. Hence the Chinese proverb: Stand like a pine, sit like a bell, walk like the wind, lie like a bow.

When it came to education, the Chinese ran a tight ship. Children were educated not just in technical or theoretical knowledge, but made to exercise self-discipline and propriety, which would manifest in their everyday speech and behavior.

Core philosophical and instructional texts such as the “Book of Rites” and “Standards for Being a Good Student and Child” instructed Chinese for centuries and millennia on proper posture as well as ethics, morality, and manners. This cultivation of personal bearing is central to the Chinese worldview in general, which primarily strives first for spiritual excellence and then material achievement as the natural result. Let’s see how this factored into their views on posture.

People spend much of their active time upright, so this part of the proverb rightly comes first.

In Confucian scholarly tradition, standing tall like the majestic pine tree implies not simply being straight, but that one possesses a strong moral foundation. Standing firmly as though rooted in the earth, keeping the neck and shoulders extended skyward is not only good for the internal organs and keeping the abdominal area in shape, but also denotes a righteous confidence.

There are many exercises for good posture, as well as simple and effective habits you can develop and use regularly.

Chiang Kai-shek, military leader of China during World War II, was known for his ramrod-straight back and diligent living habits that helped him pull the country together in one of the darkest times of its history.

Through Chinese medicine, it was common knowledge that being hunchbacked places undue stress on the stomach, intestines, and spine; the ancients summed up these posture-induced ailments as being the manifestation of bad qi distribution caused by slouching.

There are many exercises for good posture, as well as simple and effective habits you can develop and use regularly. Standing straight in one place for five minutes a day can do wonders for your spine in the long run. When you get a phone call, find a wall and put your back and shoulders to it to practice getting that pine tree right.

Good posture was about maintaining bearing and physical focus. Getting too comfortable and slouching into the fluff of a couch, armchair, or mattress means not developing that focus or letting it stagnate.

For the ancient Chinese, who did not use high-legged chairs until the 12th century, sitting or kneeling on mats was the norm. The conversations between Confucius and his disciples were conducted from the ground, with those who wished to speak rising respectfully from their positions.

Kneeling on the heels, according to Chinese medicine, helps stimulate the tendons around the knees, and keeps arthritis at bay. Furthermore, kneeling encourages a straight back and helps open a vital qi pass that assists proper functioning of the stomach, spleen, and liver.

It’s not realistic to throw out the chairs and turn them into firewood, but there are still ways of retaining good posture. If you sit only on the edge of the chair, as Chinese in the last few centuries did, you actively remind yourself to maintain balance and keep your back upright.

While the analogy of sitting like a bell may not be obvious to the uninitiated, the logic is sound on both a physical and spiritual level. Chinese religious traditions included static, cross-legged meditation; mastery of these techniques requires both a strong torsal core and the ability to enter a mental state of tranquility. Sitting meditatively implies having reached a relaxed yet firm composure—like a bell—which has natural strength even as an empty object.

Move with decision, and carry yourself with purpose. According to ancient Daoist teachings, by emptying oneself of distractions, one would be able to open the requisite qi channels and walk effortlessly, with natural poise and confidence.

The Chinese even had standards when it came to sleep. Confucius taught that lying on the back was for the dead. People should maintain good resting form, like a bow, with the joints bent in relaxation. Lying on one’s side meant maintaining some semblance of the upright pose exercised during the day. According to ancient doctors, sleeping on the side is also beneficial for optimal qi flow that would be otherwise stifled by lying on the stomach or back.

Traditional Chinese beds were either mats on the ground or relatively hard surfaces, like the “kang,” a flat brick oven. Popular in northern China, the bricks, preheated during the day, made for a hard yet cozy bed in the harsh winter.