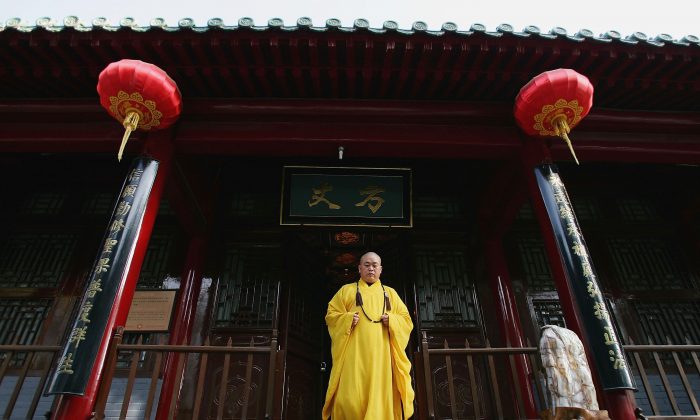 Shi Yongxin, abbot of the Shaolin Temple, walks out of the monastery premises in in Dengfeng City, Henan Province, China, on April 7, 2005. (Cancan Chu/Getty Images)
China

A Shaolin Temple in China has sued the tourism bureau of a local city government over the share of revenues for its temple, which is a large moneymaker in the area.

The case, filed last year, is being heard in the Zhengzhou Intermediate People’s Court; there is no public trial date.

The Shaolin Temple is demanding about 50 million yuan ($8 million) and an additional delayed payment of 2 million yuan (about $325,000) from the Songshan Scenic Area Management Committee, which manages the ticketing.

The dispute traces back to a contract signed between the two sides, represented by the famous, or infamous, Shi Yongxin, the Shaolin abbot, in late 2009. Shi is known for his distinctly un-monklike lifestyle and spending habits, and his vehement support for Communist Party policies. (He is also a member of the Communist Party’s rubber-stamp legislature, the National People’s Congress.)

Shaolin is a form of Buddhism with a martial arts component, and traveling Shaolin monks are known for their displays of kung fu prowess.

Officials from Zhengzhou City and Henan Province, where the temple is located, were to administer the tickets and give Shaolin a royalty of 30 yuan ($4.8) per person, on the basis that each person admitted was assumed to have purchased a 100 yuan ($16) ticket.

The sum was to be paid monthly, and give the tourism company the right to use the “Shaolin” name.

A dispute arose because of a disagreement in the interpretation of the contract. Shaolin demanded payment based on the number of people who went through the temple; but the Songshan Scenic Area Management Committee only provided a royalty for the tickets which it actually sold. In fact, many more people toured the temple than paid for tickets, because Songshan gave many tickets away. In the end it paid Shaolin only $2.4 per ticket it sold, and nothing for the tickets it gave away.

“According to national policies, some visitors need free tickets. And since the scenic site doesn’t receive a penny, how could we pay the Shaolin Temple?” an unnamed official was quoted saying in Chinese press reports.

Not so much the details, but the whole idea of a Buddhist temple getting into a legal dispute about tourist dollars struck many Chinese as incongruous.

A blogger with the moniker “Often Speeding” on the popular online forum Kdnet said: “When did temples ever collect admission fees in previous dynasties? Now, the current dynasty is the first to start collecting fees.”

Another user wrote: “The government and Shaolin Temple are greedy—their eyes glow when seeing money. Visiting temples is free overseas.”

There are about 1.5 million visitors to the temple annually, according to Sohu.com, which pegs the income from tickets at as much as 150 million yuan ($24.4 million)—clearly a number worth fighting over.