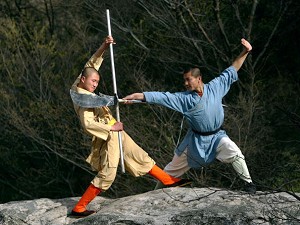 Beijing recently launched the “Global Chinese Kung Fu Star TV Competition,” a reality TV show jointly produced by the Shaolin Temple and Shenzhen Satellite TV Station. This star-search will introduce a new group of young kung fu talents to the entertainment community of film, television and even Hollywood. The winner of this competition will land a role in the new movie New Shaolin Temple. This has sparked discussions about the Shaolin Temple's movement towards secularization and commercialization.

According to Xinhua.Net, Fu Min, the head of Shenzhen Satellite TV, first proposed the idea of the “Global Chinese Kung Fu Star TV Competition” based on the singing contest “Super Voice Girl”. Fu Min claims that when he shared the idea with Shi Yongxin, the current abbot of Shaolin Temple, Shi completely agreed and supported it. According to Fu Min, the Shenzhen TV Station will pay the show's entire cost of over 20 million yuan, since Shaolin Temple does not participate in business ventures.

Fu Min conservatively estimated that more than 200,000 contestants will register for the six-month-long contest. In addition to kung fu abilities, the contestants must display artistic capabilities and give strong stage performances. Those who make it to the finals will sign a contract with the China Kung Fu Star Performance Brokerage Company. The winners will have an opportunity to play a role in the TV series, “New Shaolin Temple: Monks in the Army” and the Hollywood movie New Shaolin Temple. In order to avoid any conflict of interest, the monks practicing in the Shaolin Temple will not participate in the contest.

Throughout history the Shaolin Temple has been considered mystical and the treasure trove of many kung fu secrets. Today, the ancient temple is devoting itself to film and TV star-searching with great enthusiasm. However, Fu Min repeatedly emphasized, “What we are doing is a cultural promotion, not cultural industry. Promotion for is improving public welfare, while industry is commercialism. Shaolin Temple does not make any money from this activity.”

Shaolin Temple will not exactly end up empty-handed. Fu states that Shenzhen Satellite TV Station will pay Shaolin Temple in the form of donations. It will pay over one million yuan of donations to the charity organizations, including the Chinese Traditional Kung Fu Research Foundation and the Children's Shaolin Temple established by the Shaolin Temple. Fu Min added that the size of the donation has no direct relationship with the popularity or otherwise of the TV show.

Huaxia.Net posed the question: How will producing an entertainment program called “Super Monk”—which imitates the singing contest “Super Voice Girl”— bring any honor to Buddhist doctrine? Using Buddhism as entertainment is a blasphemy to the Pure Land of Buddhism.

Many martial arts schools opened near the Shaolin Temple in the 1990's, with more than 32,000 students in total. The Shaolin Pharmacy was reopened in June 2004, and three traditional secret drug recipes were first released to the public on the internet.

Shaolin Temple authorized an enterprise in Taiwan to produce an internet game called, “The Legend of Shaolin,” which was the first 3D net game based on the Sui and Tang dynasty culture of Shaolin.

In 2001, two administrative villages, some martial arts schools and stores near Shaolin Temple were relocated, consisting of more than 500,000 square meters and 20,000 residents. The total cost for the relocation was over 300 million yuan. In 2004, the Shaolin Temple invested more than 50 million yuan in repairs and renovations—it was the largest-scale renovation in history. The renovated buildings included Jinnaluo Temple, Liuzhu Temple, a storehouse, and a library. The total area renovated was over 20,000 square meters.

What is Shaolin's Gross Income?

The second source of income is from the kung fu performances. Since Shi Yongxin became the abbot of the temple in 1987, more and more monks of the temple have participated in international religious conferences and Buddhism activities overseas. At the end of 2004, Shaolin performance teams had performed more than 10,000 times in over 60 countries. According to UK's The Guardian , the income for a performance in the U.S. was approximately $10,000.

In October 2005, Shaolin Temple and Zhengzhou Song and Dance Theatre co-sponsored an original opera titled Shaolin in the Wind that was first performed at the Poly Plaza International Theater in Beijing. Now Shaolin in the Wind has signed a contract with Landmark Entertainment Group for approximately 800 performances in the U.S. over the next two years. The expected revenue is $8 million.

The other major income is from donations. As Shaolin temple becomes more involved in social activities, their income from donations also increases.

“We are not seeking income, the income from entrance tickets has been able to cover all the expenses for the monks.” Shi said. Currently, the temple adapts to the supply system and provides some allowances for monks. As reported, Shi Yongxin is the first monk who has an MBA degree.

Experts from the Chinese Academy of Social Science points out that due to environmental influences, the formerly non-secular temples of China have become involved in marketing. It is reported that Shaolin is applying for one of the world's highest cultural inheritance designations. Some media outlets have commented that the day the application is approved is the day that all non-secular elements of Shaolin Temple will have slipped away.