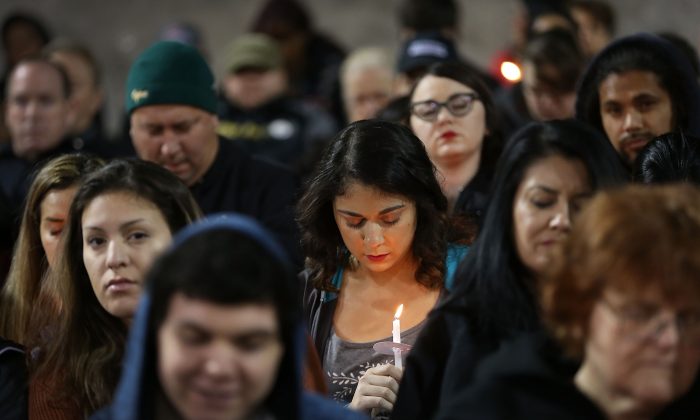 People hold candles on Dec. 3, 2015, as they attend a vigil at the San Manuel Stadium to remember those injured and killed during the shooting at the Inland Regional Center were killed in San Bernardino, Calif. (Joe Raedle/Getty Images)
US

Shannon Johnson Remembered as a Hero for Saving Coworker’s Life During Calif. Shooting

Amid the chaos of the mass shooting San Bernardino, California, that left 14 people dead, a 45-year-old man died while trying to shield a 27-year-old woman.

Denise Peraza, a woman who was inside the Inland Regional Center building where the shooting took place last week, told ABC-7 that her 45-year-old coworker Shannon Johnson sacrificed his life to save her’s.

Peraza wrote: “Wednesday morning at 10:55 a.m., we were seated next to each other at a table, joking… would have never guessed that only five minutes later, we would be huddled next to each other under that same table, using a fallen chair as a shield from over 60 rounds of bullets being fired across the room.”

Peraza was shot in the lower back. Twenty other people were injured.

Remember this man. Shannon Johnson. A true hero and a real man. May his name never be forgotten #SanBernadino pic.twitter.com/HUv4niMqxZ

Johnson, however, did not survive the shooting, but she said he should be remembered as a hero.

“I will always remember his left arm wrapped around me, holding me as close as possible next to him behind that chair, and amidst all the chaos, I’ll always remember him saying these three words, ‘I got you.’ I believe i am still here today because of this amazing man,” she said.

#ShannonJohnson gave his life to save a coworker during #SanBernadinoShooting shielding her saying “I’ve got you” pic.twitter.com/KPQlmI0vzh

Johnson had served as an inspector at the public health department.

She added: “This amazing, selfless man who always brought a smile to everyone’s face in the office….this is Shannon Johnson, who will be deeply missed by all. …my friend, my hero.”

According to CNN, Johnson knew Syed Rizwan Farook, one of the shooters. They usually talked about religion, and Johnson said he would get really upset if offended.

“Shannon would talk to him and just let him know that if anybody is disrespecting your religion — eff them,” Peraza told the network.

Farook and his wife, Tafsheen Malik–the other suspect in the case–were shot and killed by police in a hail of gunfire.

“Shannon Hilliard Johnson was covered in tattoos, he had a big bushy beard, but he was a kitty cat. He was the kindest person anyone has ever met,” Pifer told People magazine. “He loved people and animals – just everybody. He just loved people. He loved telling stories.”