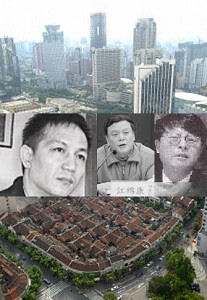 HONG KONG—On November 30, 2007, the richest man in Shanghai, Zhou Zhengyi, was sentenced to 16 years in prison. Zhou appealed on December 10 and claimed he wanted revenge according to a newspaper report. After the verdict, his sister stated he was a scapegoat.

Several media in Hong Kong revealed former Chinese leader Jiang Zemin's oldest son, Jiang Mianheng, was involved in Zhou's case. Human rights lawyer Zheng Enchong who's been keeping a close eye on the case said in fact Jiang Zemin's second son, Jiang Miankang, was also involved. According to Zheng, among the eight parcels of land that Zhou allegedly embezzled, two of them belong to Jiang's two sons. Zhou was in fact the two brothers' front man and they worked closely with one another.

On the days of Zhou's trial (October 23) and judgment (November 30), the Hong Kong based Information Center for Human Rights & Democracy (ICHRD) released two news reports about Jiang Mianheng's involvement in Zhou's case. According to the Information Center, on May 26, 2003, the first time Zhou was arrested, the last person Zhou met with was Jiang Mianheng.

Reports Are Consistent With Leaked Documents

Attorney Zheng Enchong said he believed the information releases by ICHRD were correct, “I saw what happened with my own eyes and what the Center said corresponds with a lot of what happened.” According to Zheng, after he was released from jail on June 5, he received more than 20 credible documents from residents in Shanghai including at least three retired high level officials and officials from the Shanghai Municipal General Office. These documents reported Jiang Zemin's two sons were involved in Zhou's case.

“The Jiang family and Zhou work together as a criminal group. The Jiang family can't borrow money in the name of government officials, they must make up titles. Zhou can borrow however much he wants in his name (being the richest man in Shanghai). Zhou is the real victim, a rubber stamp for Jiang's political gangs to borrow money in Hong Kong,” said Zheng.”

Zheng said, “Based on information I have, Zhou and Jiang had borrowed money from June to August 2003. On September 5, 2003, the central government commented on a report from the Bank of China 'find out the details of how money was loaned to Zhou Zhengyi.' After September, no more money was loaned to them.”

In 2004, Hu Jintao personally assigned the vice president of the Bank of China to go to Shanghai and strictly control loans made in Shanghai. This resulted in Chen Liangyu, at a Politburo meeting in July 2004, condemning Premier Wen Jiabao's policy of using a macro economy regulation to weaken the economy in Shanghai.