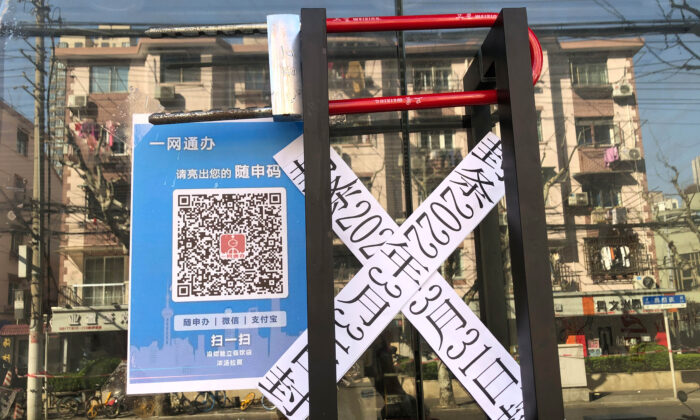 The entrance to a noodle store is locked and sealed in the Jingan district of western Shanghai, April 4, 2022. China has sent more than 10,000 health workers from across the country to Shanghai, including 2,000 military medical staff, as China's largest city struggles to stamp out a rapidly spreading COVID-19 outbreak. (AP Photo/Chen Si)
INSIDE CHINA

A Chinese media article said Shanghai cannot be put under lockdown, otherwise the core engine of China’s economy will be extinguished.

Despite stringent lockdown measures, Party vice premier Sun Chunlan, who was visiting Shanghai on April 12, said the situation in the city was still grim and complex. In a commentary on April 10, Xinhua, the regime’s mouthpiece, said this round of epidemic prevention in Shanghai had entered the “most critical and vigorous” stage and vowed that “dynamic zero-COVID” would occur as soon as possible.

The communist regime remains stubbornly wedded to a policy called “dynamic zero-COVID,” triggering a large number of serious humanitarian disasters and secondary disasters. It also resulted in a regional and social lockout, failure of management, and hardship to people’s livelihood.

With a resident population of over 24 million, Shanghai is China’s economic, financial, and service center, as well as home to the world’s largest port, Shanghai port.

Chinese financial news platform Gronhui published an article on March 27 explaining why Shanghai should not be put under lockdown from various perspectives, including economy and finance, airport logistics, and medical and health care.

As the financial, trade, and economic center of China, Shanghai not only serves the needs of its residents, but also plays an important role in national economic and social development, and even has an impact on the global economy, the article argued.

“Shanghai is the core engine of the Chinese economy—it cannot stall,” the article said. “In 2021, Shanghai contributed 3.8 percent of China’s GDP with less than one thousandth of the country’s land area and 1.7 percent of the population.”

Only eight provinces and cities contributed to the CCP Central Committee’s finances in 2021, with Shanghai ranking second, and paying 929.4 billion yuan (about $145.8 billion) in net tax to the central government, more than the combined net subsidies to Henan, Heilongjiang, and Sichuan Provinces, the article said. Other provinces have varying degrees of fiscal deficit, and rely on the central finance for support.

Shanghai port is the main hub port along China’s coast. Since 2010, Shanghai has become the world’s largest shipping container port. In 2013, the cargo and container throughput of Shanghai Port ranked highest in the world.

In addition, even amid the pandemic that has severely affected the global economy, Shanghai port has maintained efficient operation and become an important link in ensuring global supply.

“If Shanghai closes its port, not only will a large number of cargo ships drift in the East China Sea, but the transportation of goods to mainland China will cease, bringing the economy of many parts of the country to a halt,” the article said.