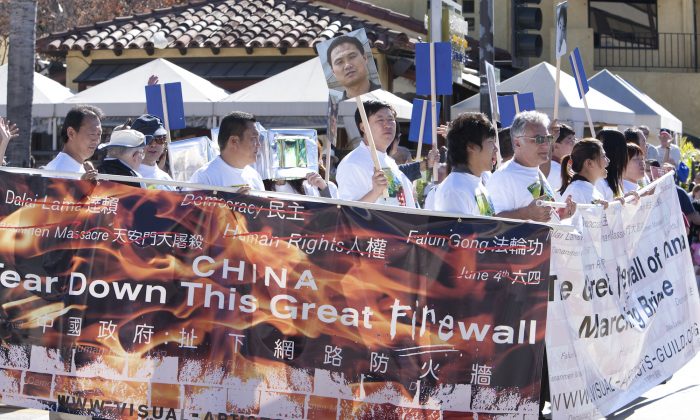 Protesters march against China's censorship of the internet in Pasadena, Calif., in this file photo. (Jose Gil/Shutterstock)
Religious Freedom

He Binggang, 46, is the owner of a computer and electronics firm in Shanghai. Since October last year, He and his fiancée, Zhang Yibo, a former business manager at Siemens Shanghai, have been detained for allegedly helping the Chinese public gain access to uncensored information by circumventing the communist regime’s internet firewall.

Both He and Zhang practice Falun Gong, a spiritual discipline including five meditative exercises and a set of moral teachings centered on the principles of truthfulness, compassion, and tolerance. Its popularity grew in the late 1990s in China, with estimates putting the number of practitioners at 70 million to 100 million.

Perceiving this popularity to be a threat, the CCP launched a brutal campaign against Falun Gong in 1999. Since then, millions of adherents have been detained in jails, labor camps, and detention centers across the country, where they’re subjected to torture, slave labor, indoctrination, and forced organ harvesting.

The Epoch Times has confirmed with sources close to the case that the CCP police had been monitoring He and Zhang for some time. By monitoring internet traffic, they traced some packets to a firewall circumvention tool called oGate.

The Chinese regime runs the world’s most sprawling and sophisticated online censorship and surveillance apparatus, known as the Great Firewall, blocking internet traffic in and out of China.

Many Chinese inside the country thus use circumvention tools to bypass the CCP’s firewall to access uncensored information from the outside world, such as virtual private networks (VPNs).

Over the years, Falun Gong practitioners have developed a suite of firewall circumvention tools, which are free to use. The latest such tool is oGate, which doesn’t require the user to install any software. Because of its ease of use, oGate enables millions of page views per month.

At around 9 p.m. on Oct. 9, 2021, two dozen officers from Shanghai’s Changning District Police Station arrested He and ransacked his home, without an arrest warrant or search warrant. Neither did they provide a list of confiscated items, which included He’s personal computers and cellphone, according to a friend of Zhang’s.

Zhang was also taken by police, and the couple have been held in Changning District Detention Center since then.

During their first five months in detention, He and Zhang’s only way to communicate with the outside world—through their lawyers—was denied by Changning District Detention Center, which said it was an order “from above,” Zhang’s friend told The Epoch Times.

In early March, the lawyers were finally allowed to talk to their clients over the phone, without video.

He Binggang had displayed exceptional technical acumen since he was a teenager. His invention of a voice-activated system that helped blind people use the computer won him a top prize at the age of 15. He passed the programmer’s certificate exam when he was 16, according to Minghui.org, a U.S.-based website that serves as a clearinghouse for information on the persecution of Falun Gong in China.

At 18, He was accepted, without having to take an exam, to the prestigious Fudan University in Shanghai. Four years later, he was again accepted without an exam to graduate school at the university.

However, everything changed for He after the persecution of Falun Gong began. Fudan University forced him to drop out of graduate school in 2000 because he wouldn’t give up his faith.

Since then, He has been arrested, detained, and tortured many times, to the point where he was almost paralyzed. But whenever he could, he tried to keep abreast of developments in internet technology and became a self-taught computer expert.

In 2007, He opened a computer and electronics firm after a six-year prison term.

He once said: “I was very much into philosophy, searching for the purpose of life until I found my belief [Falun Gong]. I do business honestly, and I don’t fight with others for profit. My heart is at peace, and I’ve made a lot of friends.”

His business grew rapidly, even though He and his company were under police surveillance. The CCP police wouldn’t tolerate He’s success in business, and in April 2010 planted “illegal items” in his business to use as a pretext to raid his company and put him in detention, according to Zhang’s friend.

While in detention, He was beaten so badly that he developed spinal compression. He suffered excruciating pain, but received no medical care for nine months, from July 2010 to March 2011.

On June 4, 2009, Zhang and her mother, Li Yaohua, also a practitioner, were taken from their home by police for distributing information on Falun Gong. Despite rescue efforts by Zhang’s older brother, who is in the United States, and her grandfather, who lives in Taiwan, Zhang and Li were both given prison terms.

Zhang was sentenced to 18 months. This ended Zhang’s career as a business manager at Siemens Shanghai.

Zhang’s mother was given a 3 1/2-year sentence. She became very ill in prison with sciatic nerve and cervical spine disease, and vomited when she ate. She also had high blood pressure and angina. In March 2010, she was sent to the hospital, but the prison refused to release her on medical parole.

Li has not recovered her health to this day.

Now, He Binggang’s health is deteriorating inside the detention center. He told his lawyer in March that he was suffering from continuous headaches, abnormal digestion, abnormal clotting, and urinary incontinence, the friend told The Epoch Times. At times, he couldn’t move his limbs and could only lie in bed.

The cases of Zhang and He were forwarded to the Changning District Court on March 15. They have been waiting for a court date for three months and counting.