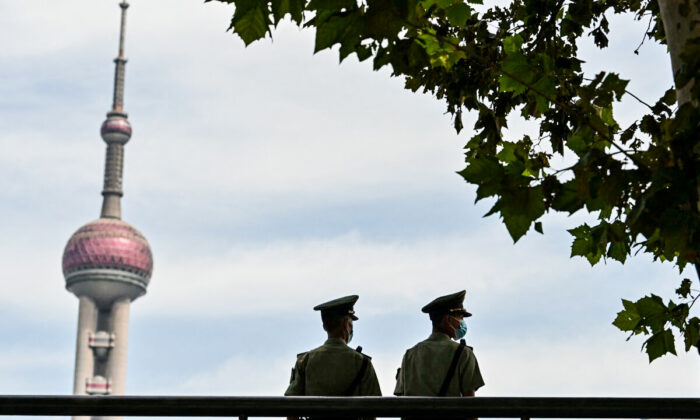 Chinese paramilitary policemen keep watch at the promenade on the Bund along the Huangpu River in Shanghai on Sept. 24, 2021. (Hector Retamal/AFP via Getty Images)
China

Taiwanese media outlets have posted two letters that allege a chief at the Shanghai State Security Bureau (SSSB) sexually assaulted a woman while driving her home from a party.

The letters were published under the names of the father and husband of the alleged victim. The woman, named Shen Yue, is the daughter of an intelligence officer at the SSSB, who is a subordinate of the accused chief.

A letter published online under the father’s name, Shen Genlin, first appeared online on Nov. 1. Shen Genlin’s detailed personal information and signature were also included in the publication, effectively putting his reputation on the line.

Shen Genlin claimed that he had to leave a gathering early and that the security chief, Huang Baokun, offered to take his daughter home. Shen Yue alleged that she was intoxicated at the time and that Huang took advantage of her.

Her father claimed to have sought assistance from Shanghai authorities over the issue, but when no help came, he turned to the public and published the letter.

Just under one week later,  the SSSB published a statement on Nov. 7, declaring both the assault allegations and the original documents as false.

The following day, the woman’s husband, a Korean man named Hyun Duk Hwang, published a letter through Taiwan’s Apple Daily on Nov. 8, declaring the accusations to be true. To support his claims, he also provided extensive personal information about himself.

However, Hwang said Shen Genlin has since gone missing in Shanghai after the publication.

The Epoch Times attempted to contact both Shen Genlin and Huang on Nov. 6 through information included in the letters, but neither responded. The SSSB also did not respond to a request for comment.