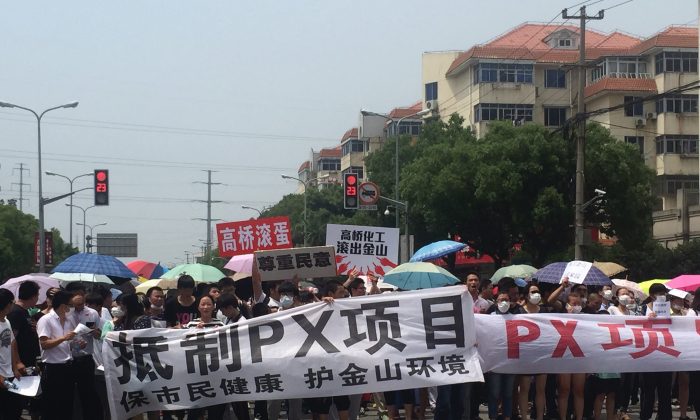 Demonstrators hold banners with slogans to protest against a paraxylene (PX) project in Jinshan district in Shanghai on June 23, 2015. (STR/AFP/Getty Images)
China

SHANGHAI—Police in China’s financial hub Shanghai took away at least three busloads of environmental protesters outside the municipal government Saturday, preventing the latest rally that started with a rumor that a petrochemical plant could move into the area.

Concerned with public health but shut out of decision-making, more affluent Chinese are increasingly taking to the streets to oppose potentially hazardous projects such as petrochemical plants. Authorities in turn have suppressed the assemblies that have in the past turned violent and weakened the authority of local governments.

In the latest case, thousands of residents in the Shanghai suburban district of Jinshan have been protesting outside the district government — about 70 kilometers (43.5 miles) from downtown Shanghai — during the past week following the rumor about a petrochemical plant moving into their neighborhood. Shanghai authorities have dismissed it as untrue.

Still skeptical, the residents planned to protest outside the municipal government in central Shanghai on Saturday, but the venue was guarded by hundreds of police, both uniformed and plainclothes. SWAT police patrolled police tapes fencing off the area the protesters planned to gather.

The police forced demonstrators to board buses before driving away from downtown Shanghai. Scuffles broke out with less obedient protesters. Police also grabbed an Associated Press reporter and tried to shove him away. Plainclothes officers used umbrellas to try to block filming.

“People got angry and started to chant, and then they were taken away by police,” said a Jinshan resident who only gave her family name of Shen.

The rumor involves a paraxylene plant the protesters believe will be built in an industrial zone in Jinshan. Paraxylene is a hazardous chemical used to produce fibers and plastics. Exposure to paraxylene can cause eye, nose and throat irritation. In April, six people were hospitalized in an explosion at a paraxylene plant in the southeastern Fujian province.

The Shanghai government announced Friday that it would cease any environmental assessment for the industrial zone — possibly meaning no new project — and focus on cleaning up pollution. It earlier made repeated assurances that no paraxylene factory would be built in Jinshan.

However, many are distrustful of the government, citing rampant corruption, incompetence, and lack of transparency in decision-making.