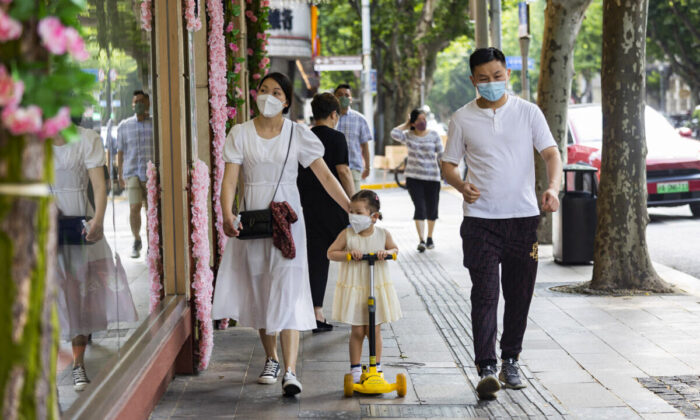 People walk in the street in Shanghai, China, after the lifting of lockdowns on June 2, 2022. (Hu Chengwei/Getty Images)
INSIDE CHINA

As Shanghai reopens following two months of lockdowns, a resident and rights activist told The Epoch Times that his first wish is to unearth the cause of death for his wife at a local hospital during the outbreak.

A native of Shanghai, Yu Zhonghuan, said that his wife, Shi Ping, who had been under the care of the Shanghai Blue Cross Brain Hospital, passed away on April 28. While authorities said that the cause of death was severe lung contamination, he doubts the results.

The hospital is in the district of Minxing in the Chinese financial hub. According to its site, the hospital won accreditation from the Joint Commission International, an independent, non-for-profit organization that describes its certification as “a global leader for health care quality of care and patient safety. ”

“Over the past years, my wife’s condition had remarkably improved,” Yu said of her lung condition.

However, COVID-19 hit the hospital at the end of March, and a large number of doctors and nurses were diagnosed with COVID-19. Yu believes that, due to understaffing and measures to eliminate COVID-19 transmission, his wife likely did not receive proper care or contracted COVID-19 and eventually lost her life.

“At the worst moment, there was only one single doctor left [on duty] in the whole program, in charge of 50 or 60 patients,” Yu said. “He was too busy to care for them, many of whom were in critical condition.”

“The hospital should have been well prepared [for treatment],” he said. “You [the government] are effectively killing when you order more than half of the doctors—many of whom were chief physicians—to stay in their homes while keeping so many patients waiting for hospital treatment.”

Yu requested that hospital officials to conduct an autopsy for his wife upon learning the news, but was met with excuses meant to discourage his efforts, according to the activist. Two days later, they notified him that the health commission in their district had dismissed his request, too.

Hospital authorities also claimed to Yu that the lockdowns had put autopsy services on hold.

“I lodged my complaints with a range of authorities, including 110 [China’s number for calling the police] and the supervising agencies,” he said. “None of them accepted my complaints, just as in an anarchic state.”

Rather, they urged him to agree and sign his name on their cremation plan. They even threatened to forward his wife’s corpse to his own home or the call police if he refused.

Lack of Transparency Around COVID-19 Data

Yu said that he kept daily track of the official COVID-19 updates from the Shanghai Health Commission during the outbreak, and that he found that official reports contradicted with what he knew was happening even at his wife’s single hospital.

“This hospital wasn’t placed on the list of the health commission until April 11,” he said. “However, they told me there had been [confirmed cases] when I traveled there on March 30.”

“Seven of my wife’s roommates died,” Yu told The Epoch Times. “Their ward accommodated ten roommates in total. They all knew the situation because they had stayed there for many days.”

He said that the discrepancies he saw with the official COVID-19 reports was “disturbing.”

The Epoch Times tried to contact the Shanghai Blue Cross Hospital without success despite repeated attempts. The Shanghai CDC and city’s health hotlines could not be reached for comment.

Zhao Fenghua and Luo Ya contributed to this report.