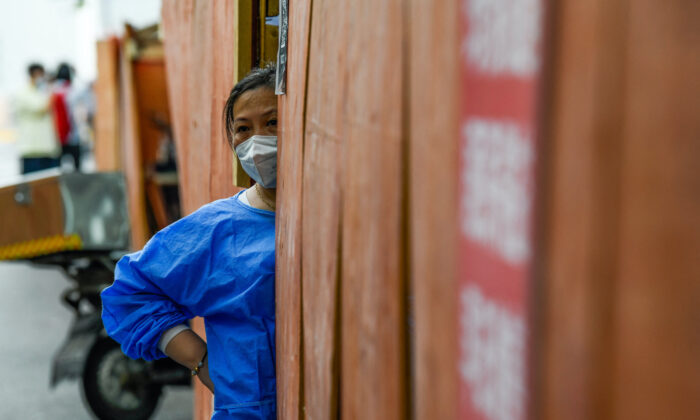 A community volunteer stands behind the fence in a residential area under a COVID-19 lockdown in Shanghai's Huangpu district on June 22, 2022. (Liu Jin/AFP via Getty Images)
INSIDE CHINA

Shanghai Declares Victory Over COVID, While Residents Call It a Tragic Joke

Shanghai’s Communist Party chief Li Qiang on June 25 announced that the financial hub had finally won its three-month battle fighting COVID-19. However, it came at a huge cost to the Shanghai economy while creating immense suffering for the city’s 25 million people.

Li declared the victory at a municipal meeting of Chinese Communist Party (CCP) representatives and attributed the “victory” to the CCP-led political system and the authorities’ firm adherence to the “dynamic Zero-COVID” policy.

After the news report was posted on a People’s Daily social media account, the history log of the comment section showed that readers left 761 comments. However, in a short while, there were only five comments remaining, and a message appeared at the bottom of the webpage which said, “inappropriate comments have been filtered, and some comments will not be displayed for the time being.”

A Chinese blogger, whose internet name is “Proud Girl,” reposted the news report on Twitter, saying that Shanghai’s “victory” is a “tragic joke.”

On Zhihu.com, a Chinese Quora-like question-and-answer platform, someone asked the question, “How do you view Shanghai’s victory over the pandemic?” Another person provided an answer saying, “You expect them to apologize, yet they expect you to thank them.” It became a top-rated answer, “liked” by 4,526 readers.

Starting in March this year, Shanghai was placed under partial lockdown to curb the virus, and then full lockdown was implemented in early April until the city gradually eased pandemic restrictions in June. The three-month strict “zero-COVID” policy hit Shanghai’s economy hard.

Using Shanghai’s annual GDP in 2021 as a reference, which was $646 billion, the city’s average daily output is $1.77 billion, and the direct economic loss of Shanghai’s 70-day closure is expected to be $123.9 billion, if the partial reopening towards the end of lockdown is not considered.

This calculation does not include the financial and human resources spent on building makeshift hospitals in Shanghai, quarantining large numbers of people, and repeated mass nucleic acid testing of its 25 million residents.

Moreover, some enterprises have permanently closed. Many foreign-funded enterprises have already withdrawn or are planning to withdraw from Shanghai, the exact numbers are not yet available.

Sick people died after struggling to access medical care during the lockdown, there were incidents of people committing suicide due to unbearable stress or depression, and elderly people who lived alone were found dead at home, likely from starvation. On April 11, a frontline medical personnel member died suddenly due to overwork.

As the Chinese state-run media rarely reports bad news, some civilians in Shanghai are trying to do their own investigation to collect data.

A Twitter account named “Shanghai 2022 Lockdown Unnatural Death Record” has so far recorded 136 death cases. Among them, 69 cases have complete information including names, addresses, time of death, and detailed accounts.

Li Yuanhua, a former professor at Beijing Normal University, told The Epoch Times that some Chinese belonging to the well-off classes used to enjoy a carefree life, thinking that it would always be wonderful and peaceful. The Shanghai lockdown made them suddenly realize that no matter how rich they are, there might be a scenario where they cannot buy anything. No amount of money can guarantee the safety of their own lives.

“The CCP claimed that they ‘won the battle.’ Who won? Through the lockdown of Shanghai this time, people have thoroughly seen the evil nature of the CCP regime, and they no longer trust and put hope in the CCP,” Li said.

In April and May, there were numerous blog articles on Chinese social media sharing people’s reflections on Shanghai people’s hopeless situation, something they could have never imagined before. A new catchphrase emerged from these articles, which says, “Financial freedom means nothing on the Titanic.”

Many middle-class residents in Shanghai have publicly condemned the Communist Party on social media such as WeChat.

“Thanks to the lockdown, a huge number of Chinese people have awakened,” Xue Ping (pseudonym) wrote in her post publicly. “Let’s hope Xi Jinping will be re-elected, so the CCP will collapse during his term of office. If someone else comes to the throne, it may prolong the CCP’s life, and the commoners will suffer even more.”