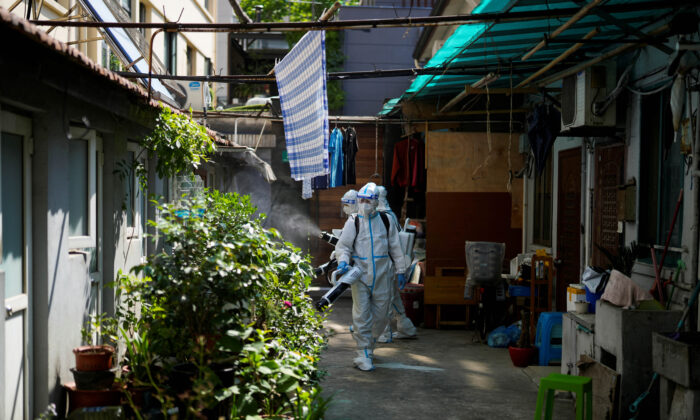 Workers in protective suits disinfect a closed residential area during a lockdown in Shanghai, on May 18, 2022. (Aly Song/Reuters)
INSIDE CHINA

During the lockdown in Shanghai, a lot of the volunteers assisting in the pandemic prevention and control measures came from outside the city. Many of them were left on the street without shelter, while there were those who also contracted the virus because of poor hygiene practices in their temporary shelters.

Most of them were recruited through volunteer agents.

In China, the so-called volunteers are paid; the jobs come with compensation, and the agents also earn a commission; but, they are still called “volunteers.”

During the pandemic, these volunteers get paid based on the type of job and the level of risk of becoming infected. The ones working in temporary field hospitals known as Fangcang get up to $120 a day; others, such as those assisting in disinfection activities or neighborhood watch, are paid from $20 to $90 a day.

The volunteer jobs are assigned with an agreement, not a contract. Among the many chaotic situations occurring during the Shanghai lockdown, the pandemic prevention and control volunteers also became victims of practices under the strict zero-COVID policy.

Two volunteers told the Chinese edition of The Epoch Times that they were not even given a place to stay, and one expressed that he would never go to Shanghai again.

Wu Ming (pseudonym) from Hubei Province, intended to join the volunteers and work in one of Shanghai’s makeshift Fangcang.

He saw the ads from the Shanghai Fangcangs in early April. After making a connection, he arrived in the city on April 11.

He was careful before making any commitment. He contacted several agents to ensure the jobs were real and available before he went to Shanghai.

He felt lucky that he had been careful. After he arrived in Shanghai, indeed at least six agents told him that the job was no longer available or the pay was not as good as promised. However, two jobs were still open, and so, he called a cab and went to the agent in Yangpu District.

However, when he arrived, he was again told the job was no longer available.

All public transportation was still suspended; without a pass, he was stuck in Yangpu.

Dragging his carry-on with him on the streets, he found a local supermarket open for two hours every morning. He was lucky to be able to get food at the supermarket for the next five days. On one rainy night, he managed to find an ATM booth in which he spent the night.

After five days of living on the streets of Yangpu, his fellow workers from Hubei sent a taxi to pick him up from Yangpu. He recently settled on a job assisting the local community in delivery.

He said that many people from foreign provinces fell for the agents’ false ads and claims of high pay.

They ended up being homeless and stuck in the Shanghai lockdown because the number of vacancies were limited and the pay was low.

He felt sad because he realized that many of those looking for work had a hard time just getting enough to eat.

Wang Da (pseudonym) came from Wuhan city. A company, also a volunteer agency, sent him as part of a team to Shanghai to do  disinfection activities in the city.

But, within a few days, someone on the team tested positive for COVID-19.

He said a dorm was set up inside the Fangcang, where it was crowded, with six to eight people in one room—no less than four—and far from the standard of the pandemic prevention regulations.

The environment was poorly maintained, and no one was in charge of picking up the trash. Infection quickly spread in their Fangcang.

Wang said that several hundred people have tested positive in the Fangcang. More than 300 people were dispatched by his company, and at least 100 of them contracted the virus.

He said, “We have not been able to do our job at all with all the quarantine requirements. Now the so-called side effects of COVID-19 will stop us from getting any other employment. No one will dare to hire us.”

Many of them worry that they might not be able to find a job for a very long time.

The local company told them that since the agents in Shanghai did not provide any compensation, the local company would not match any losses they suffered because of their trip to Shanghai.

Wang said that even the $60 a day quarantine aid wasn’t paid in full.

He said, “It’s frustrating. I won’t go to Shanghai again.”

Gao Miao and Gu Xiaohua contributed to this report.