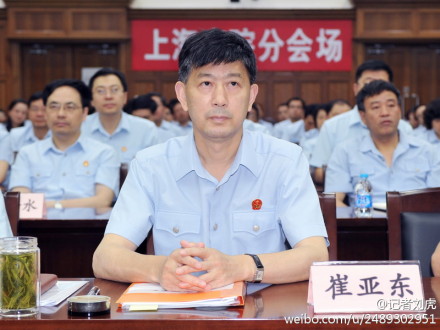 Cui Yadong was director of Guizhou Province Public Security Bureau from 2006 to 2013, but was promoted to preside over the Shanghai municipal Higher Court in April. A leaked report filed by 70 police officers who worked under Cui in Guizhou lists 16 acts of alleged corruption by the top official. (Weibo.com)
China

The extensive corrupt activities of the acting president of the Shanghai Higher People’s Court, who recently tried to defend four judges sacked in a prostitution scandal, have been revealed by an online whistleblower.

Cui Yadong was director of Guizhou Province Public Security Bureau from 2006 to 2013, and was promoted to preside over the Shanghai court in April. The leaked report was filed by 70 police officers who worked under Cui in Guizhou, and lists 16 acts of alleged corruption.

It was posted online by a Sina Weibo microblogger called Caijunshu on Thursday, but deleted by Internet censors within a few hours. Several reports on the story by local media have also been deleted. (The original Weibo post is preserved here).

“Some people are greedy and useless,” Caijunshu wrote. “Seventy subordinate police officers jointly filed a report on Shanghai High Court president, Cao Yadong, stating that he has been colluding with developers, building a private sky villa, and stealing 6 tons of Maotai [Chinese liquor] every year. The fact that this man, who has absolutely no education in the law, can become the president of the Shanghai High Court, is ridiculous. A corrupt official like this must have embezzled at least a nine-digit sum of money!”

Accompanying the blog was the filed report with the 70 policemen’s thumbprints in red ink at the bottom to indicate their seriousness.

As well as building a 1,442-square-meter sky villa, and pilfering tons of Maotai from the Guizhou Province Public Security Bureau for the past five years, the report said that Cui received a budget from the Provincial Party Committee to buy a sports utility vehicle worth 1.2 million yuan (around $200,000), and spent 20 million yuan ($3.27 million) a year on meals and transport for himself and his family.

Despite his new position, Cui Yadong has not attended law school, according to public sources. His speech at a “rectification conference” on Aug. 9 about four judges who were fired for hiring prostitutes angered netizens, because Cui said exposing the scandal via an online video had given people in China and overseas an opportunity to make a mockery of the Chinese Communist Party and its judicial system.