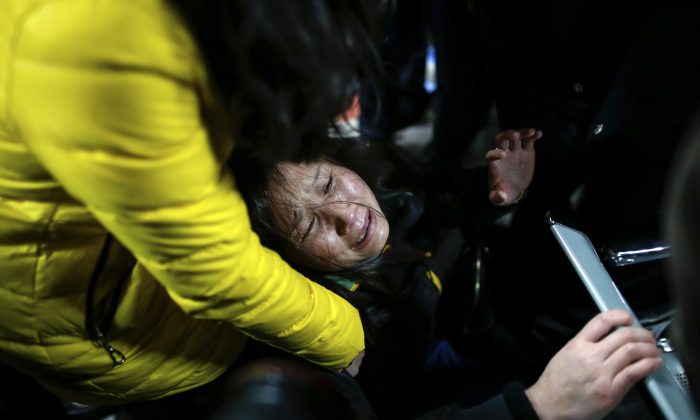 A woman grieves at a hospital where those injured by a stampede are being treated in Shanghai, China, Thursday Jan. 1, 2015. Dozens died in a stampede during New Year's celebrations in downtown Shanghai, city officials said - the worst disaster to hit one of China's showcase cities in recent years. (AP Photo)
China

Fake money sparked the New Year’s Eve stampede in Shanghai’s Chen Yi Square that killed at least 36 people and injured dozens of others.

State media and some witnesses say the “crush” started when people rushed to pick up coupons that looked like money.

Wu Tao, one of the approximately 47 people transported to the hospital for treatment, said that the fake money was thrown from a bar above the street as part of the celebrations.

But Shanghai police said on their blog that while closed-circuit television footage did show some bills had been thrown from a bar in a building overlooking the Bund, which a small number of people picked up, this did not cause the crush.

“This incident happened after the stampede,” police said in a brief statement, reported Reuters.

Another witness, Wei, said people had been trying to get on a raised platform overlooking the river.

Xinhua, a state media agency, said people were trampled on after falling down on the steps up to the platform.

“We were caught in the middle and saw some girls falling while screaming. Then people started to fall down, row by row,” a witness surnamed Yin said. She was with her 12-year-old son.

“Then people started to fall down, row by row,” Yin said. When her son was finally brought to safety, he had shoe prints over his clothes, “his forehead was bruised, he had two deep creased scars on his neck, and his mouth and nose were bleeding,” she said. Xia Shujie, vice president of Shanghai No. 1 People’s Hospital, told reporters that some of the victims had been suffocated.

Relatively graphic pictures circulated online after the news broke, showing people on the ground, some dead and some injured. Others tried to tend to their injuries, while a large contingent of police officers appeared to try to take control of the situation.

Few details were available even hours after the stampede, in part because of China’s notorious media environment. Foreign media outlets weren’t allowed to attend a police press conference, while President Xi Jinping ordered governments across the country to ensure that any similar disasters wouldn’t happen.