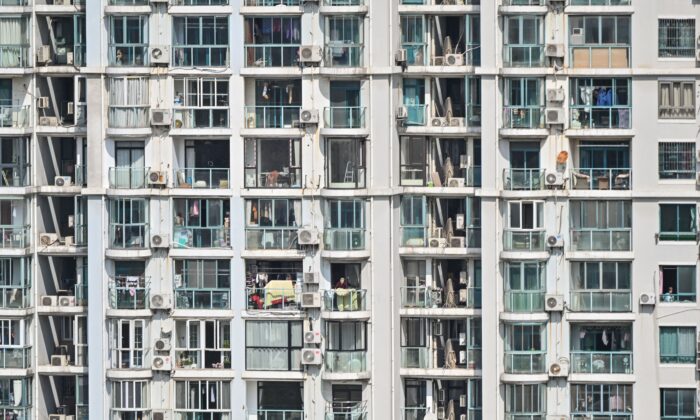 A residential building during a COVID-19 lockdown in the Jing'an district in Shanghai on April 8, 2022. (Hector Retamal/AFP via Getty Images)
Thinking About China

Shanghai as a Front Line in China’s New Civil War

China’s “new civil war”—with Xi Jinping’s ultra-Maoists pitted against the “moderates” of the Chinese Communist Party (CCP) and the free-wheeling private sector—accelerated with Xi’s lockdown of Shanghai beginning in March.

The lockdown of Shanghai (population of 25 million) was supposedly carried out to suppress a COVID-19 outbreak. In reality, it was nothing of the sort. As with the “zero-COVID” excuse to lock down the city of Xi’an (population of 13 million) for a month beginning on Dec. 22, 2021, Shanghai’s lockdown was designed to bring the locals to heel, ending the expectation of free movement and economic prosperity, ensuring that Xi’s political faction would not be challenged.

The deaths from the now-prevalent omicron variant of COVID-19 have been insignificant in China and elsewhere, especially compared with deaths in the tens of thousands from deliberately-induced widespread starvation in Xi’an, Shanghai, and elsewhere in mainland China. Starvation was used by Mao Zedong and Josef Stalin to control and reduce populations.

Residents of major cities have engaged in widespread hoarding of food to protect themselves in the event that they are locked into their residences.

Widespread videos from Xi’an and Shanghai show significant numbers of people protesting from apartment balconies in high-rise buildings, calling for food after being sealed into their apartments for weeks and more.

One report received by the International Strategic Studies Association indicated that as many as 240,000 people may have died in Xi’an alone during the December 2021-January 2022 lockdowns.

Significantly, Shanghai, apart from being a city known for its free-wheeling entrepreneurial population, is home to former Party leader Jiang Zemin’s faction, which is the major impediment within the CCP to the total domination of the Party and the country by Xi.

The “moderates” within the senior CCP structure are represented mostly by Jiang’s faction, as well as those anti-Xi and anti-Mao CCP members, many of whom will not make themselves known until it appears there is a critical mass sufficient to outvote the Xi faction.

Moreover, Xi is aware that the growing economic decline in China—and the civil unrest it has been provoking—must be disguised in the run-up to the 20th Party Congress in Beijing in October 2022. At that event, Xi hopes to be reelected as CCP General Secretary for an unprecedented third term. At that point, he would have enhanced powers to suppress his internal Party opposition even more than he now does, and he would be able to also quell civil unrest more effectively.

Jiang’s faction knows that this is a critical time for them.

Three weeks into the Shanghai lockdown, which began in late March, the Party under Xi had begun replacing or supplementing the omnipresent police and white-clad COVID medical enforcers with elements of the People’s Liberation Army (PLA) brought in from outside Shanghai.

PLA Air Force Xi’an Y-20 heavy transports airlifted the troops into Shanghai in a mass operation during the second week of April. Perhaps to calm fears of military suppression of the population, state-run Chinese tabloid Global Times published a report on March 8 quoting Feng Wei, a deputy to the National People’s Congress, suggesting more infrastructure to support the Y-20s at civil airports so that the PLA Air Force could better support the population.

The Global Times noted: “Since 2020, the Y-20 has carried out a number of military operations other than war, highlighted by the fight against the COVID-19 domestically then across the border, transporting medical personnel and vital anti-epidemic equipment and vaccines. It would be very important if civil airports across the country can provide more logistics support to the Y-20 in these missions in the future, a Beijing-based military expert who requested anonymity told the Global Times.”

The Party newspaper cited a “military expert” as an anonymous source. There was a message here: when the air armada of Y-20s brought PLA forces into Shanghai in mid-April, they were combat troops and not medical personnel. They arrived at the time when the pushback by Shanghai citizens was gathering momentum against the forced roundups of the population and the breakup of families and homes.

In a report, titled “The New Civil War in China,” published in The Epoch Times on Aug. 17, 2021, this writer noted the following:

The Chinese Communist Party (CCP) has plunged into its own civil war.

It’s between the “ultra-Maoists” around CCP leader Xi Jinping and the “liberals.” The outcome will be massively disruptive for the Chinese population and for nations that depend economically on China.

The “ultra-Maoists” are in the ascendant, leading China toward a new era of isolation from the world, possibly worse than the Mao Zedong era from 1949 to 1976.

The battle lines have been drawn over the direction of the country between the “ultra-Maoists” within the CCP leadership and the more market-oriented “liberals.” This growing polarization mirrors the “nationalist-globalist” split seen in many Western societies in recent years, but with “Chinese characteristics,” different causes, and the probability of violence.

The “ultra-Maoists” around Xi recognize that China has already depleted its foreign exchange reserves as well as its control over food and water. Hard currency holdings are believed to be at around Saudi Arabian levels. There are other assets, such as U.S. debt holdings (for which there is a limited market), but the question becomes how best to utilize its resources.

While growing urbanization, the Maoists have discovered, may have been essential for China’s economic and strategic growth, it became the source of great unrest as the fortunes of most Chinese people began to be shaken, their security and happiness evaporating.

The CCP placed mainland China into a new lockdown in early August 2021, ostensibly over the surge in cases of the Delta variant of the COVID-19 virus, but this may not have solely been the case. More likely, the CCP placed the country in lockdown to prevent a growing movement toward protest and challenge from the grassroots level.

This unhappiness—actually widespread anger—has been stimulated by the failure of the CCP to respond adequately to widespread natural disasters such as massive flooding in some areas, and drought in others. The CCP initially claimed, for example, that there were only a handful of deaths in some of the recent flooding in Henan Province, when the actual number of deaths was certainly in the tens of thousands.

Xi has been steadily reining in the private sector of China’s economy, the source of the “Chinese economic miracle.” Instead, he favors dependence only on the sluggish and unproductive state-owned enterprises (SOE) that contributed little or nothing to the “economic miracle.”

What could this mean, other than a preparation for China to return to a closed economy, autarkic and reliant only on what CCP theorists are calling an “internal circulation” economy?

The overwhelming use of the COVID “threat” to the population has enabled the Party to disguise the suppression of the private sector and all opponents of Xi. The gradual ramping up of the use of PLA personnel to fight those opposing the Party’s efforts to save society has led to a situation where PLA personnel—especially if they are not called up for action in their home areas—are induced to see dissidents as a danger to the entire population and are, therefore, fair targets to be attacked.

This process is called “pseudospeciation”: the transformation of an adversary into a species less than human and, therefore, someone who cannot be pitied or supported but, rather, killed.