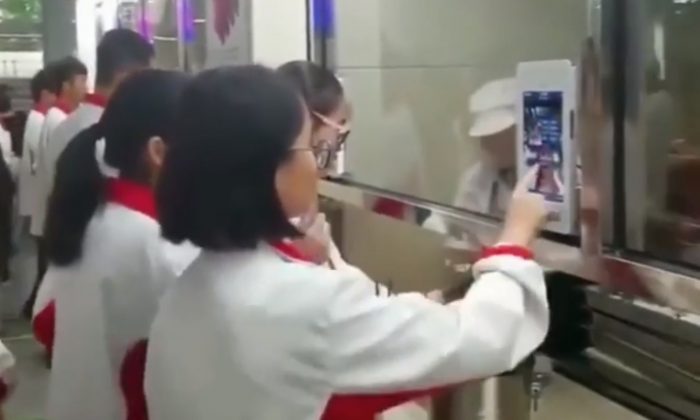 A High School in China now subjects students to facial recognition before they could be served lunch in the cafeteria. (Screenshot from Youku video/Epoch Times)
Social Issues

SHANGHAI— It’s now possible to check in automatically at Shanghai’s Hongqiao airport using facial recognition technology, part of an ambitious rollout of facial recognition systems in China that has raised privacy concerns as Beijing pushes to become a global leader in the field.

Similar efforts are underway at airports in Beijing and Nanyang city, in central China’s Henan Province.

Many airports in China already use facial recognition to help speed security checks, but Shanghai’s system, which debuted on Oct. 15, is being billed as the first to be fully automated. Currently, only Chinese identity card holders can use the technology.

Spring Airlines said on Oct. 16 that passengers had embraced automated check-in which can cut down check-in times to less than a minute and a half.

Across greater China, facial recognition is finding its way into daily life. Mainland police have used facial recognition systems to identify people of interest in crowds and nab jaywalkers, and are working to develop an integrated national system of surveillance camera data.

Chinese media are filled with reports of ever-expanding applications: A KFC outlet in Hangzhou, near Shanghai, where it’s possible to pay using facial recognition technology; and a school that uses facial recognition cameras to monitor students’ reactions in class.

But increased convenience may come at a cost in a country with few rules on how the government can use biometric data.

“Authorities are using biometric and artificial intelligence to record and track people for social control purposes,” said Maya Wang, senior China researcher for Human Rights Watch. “We are concerned about the increasing integration and use of facial recognition technologies throughout the country because it provides more and more data points for the authorities to track people.”

The Chinese regime is using technology to crack down on Uyghurs and Muslim minority groups in the Xinjiang region. China is believed to be holding up to one million ethnic Uyghurs in “re-education camps,” the United Nations human-rights panel said in August.

U.S. lawmakers proposed legislation on Oct. 10 that urged President Donald Trump to condemn “gross violations” of human rights and to press for closure of the “political re-education camps” in Xinjiang. The proposal would place sanctions on China that include banning sales of U.S.-made goods or services to Xinjiang state agents and the barring of certain Chinese entities—including the Xinjiang police bureau—from purchasing U.S.-made equipment that might be used for surveillance.