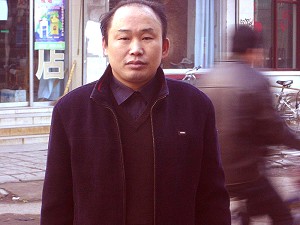 On Jan. 19, 2008, Mr. Kong Qiang, the webmaster of “Chinese Shenzheng,” published his third open letter to China's top officials, calling for the eradication of Jiang Zemin's gang, the “Shanghai Gang.”

Kong's repeated publications about the gang's corruption have resulted in numerous forced shutdowns of the Web site and threats of dismissal and sentencing to a psychiatric hospital.

Kong, an official at the Administration for Industry and Commerce in Qufu City, Shandong Province, established “Chinese Shenzheng” in July 2005 as a minority civil rights advocate Web site. The 39-year-old's Web site consists of sensitive information, such as the persecution of Shanghai policeman Zhang Baoling by the “Shanghai Gang.”

In his third open letter to Hu Jintao, Wen Jiabao and Wu Bangguo, Kong reiterated the need to prosecute Jiang's gang, “otherwise, we will not be able to face either the Chinese people, or the people of the world.”

Kong believes that the eradication of the gang is the most urgent matter in China right now, as China can only have hope after Jiang Zemin, Jiang Miamhong, Wu Chihming and Zhou Yongkang have been purged.

During a previous interview with The Epoch Times, Kong said that as a human rights activist, he has collected substantial evidence of the gang's crimes and can no longer remain silent. Kong stressed that he was willing to push ahead with the campaign to bring Jiang Zemin to justice at the expense of his own life.

The activist's third open letter questioned why the central regime still turns a blind eye to the crimes Wu Zhiming has been committing against the citizens of Shanghai. Kong believes that the reason most people are not getting involved at this critical juncture in China's history is to protect themselves.

He explains, “Although they do realize that something has gone wrong with the government, they still keep quiet and maintain the notion that the best policy is to do as little as possible. People just wait and see what the final result will be in the struggle between the Hu-Wen group and the Jiang-Zeng group, so as to see which course will be safe to take in the future.”

According to Kong, China is a secret society where the officials collude with the businesspeople, and the police have ties with the gangs. Because they are all interconnected, no one dares to upset the balance. In addition, the public lacks the courage to speak out, and officials with a sense of justice only remain silent and bottle their anger.

Kong also refers to public security officers as bandits. He wrote, “Public security officers arrest people and ransack people's households at will, disregarding laws and regulations. … When people question whether or not they are actually police officers, they usually shamelessly reply, 'Because we are unable to fight on the front lines, if we don't fight with the citizens, who can we fight against?' This absurd statement has been mentioned by police officers at the National Security Branch of the Shanghai Public Security Bureau.”

On Jan. 4, 2008, Li Huaiming,Secretary of the Discipline Inspection Committee, was entrusted by the CPC Committee for Administration of Industry and Commerce in Qufu City to relay two demands to Kong. Kong said, “The first is that I voluntarily admit myself into a psychiatric hospital, otherwise the committee would suspend my salary beginning in January and may even dismiss me. The second demand was that I remove the information about Zhang Baoliang from my Web site immediately and never report on the matter again.”

Kong expresses finds it incredible that a government official can be subject to disciplinary action with no prior investigation, interview, or notification.