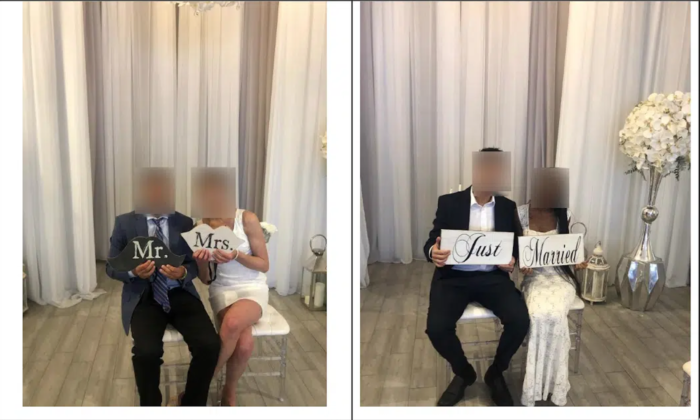 (Department of Justice)
US News

A group of foreign nationals and U.S. citizens used a provision in the newly reauthorized Violence Against Women Act (VAWA) as part of a profit-making fake marriage scheme in which American citizens were paid to marry foreigners to establish U.S. residency, prosecutors say.

Foreign nationals paid as much as $30,000 for the sham marriages, which included a fake ceremony with wedding dress, tuxedos, and photo albums, according to a multiple-count federal indictment handed announced on April 7 against the 11 individuals charged in the operation.

The scheme exploited a provision under federal immigration laws that permits a U.S. citizen to file a petition for an alien relative with the U.S. Citizenship and Immigration Services (USCIS) to expedite and automate the process of their foreign spouse obtaining a permanent resident card.

In some of the fake marriages, temporary restraining orders were obtained under made-up allegations against the American spouse by the foreign nationals of domestic abuse, in order to take advantage of a provision under VAWA that allows anyone, regardless of residency status, to obtain U.S. citizenship in cases of spousal abuse.

The scheme involved hundreds of fake marriages that took place mostly in California and Massachusetts.

Some of the recruited Americans hired to pose as spouses were homeless people, according to special agent Joseph Bonavolonta of the FBI’s Boston division. They posed for wedding pictures and were coached on how to convince immigration officials their marriage was legitimate.

“The facilitators of this alleged fraud were sophisticated and cunning,” he said in a statement. “They went to great lengths to stage fake wedding ceremonies at chapels, parks, and other locations where they’d hire online officiants to perform ceremonies and take photographic proof.”

The indictment names Philippine national and Los Angeles resident Marcialito Biol Benitez as the ring leader in the fake marriage scheme. It has been determined that Benitez used six different bank accounts to deposit a total of $400,000, according to an affidavit submitted by a Homeland Security agent.

Benitez and other “staff members” are alleged to have run the operation through a fake temporary staffing agency they called Career Ad Management. They employed several “brokers” who were also named in the indictment. Benitez is one of six Philippine nationals named in the indictment; a Brazilian national also was indicted along with four Americans from California.

Most of the foreign nationals who paid for the fake marriages were living in Massachusetts and traveled to California for the sham weddings, according to Bonavolonta. The temporary restraining orders obtained under VAWA in the scheme were mostly obtained from the Los Angeles County Superior Court, according to the federal indictment.

Eight of the defendants named in the indictment are in custody, while three are at large, including one suspected of being back in the Philippines.

It isn’t the first time federal agents broke up a fake marriage operation designed to establish residency for foreign nationals. In 2019, 96 people including an American attorney were indicted in a marriage fraud ring out of Texas.

That same year, a federal agency reported that it had discovered a large number of fraudulent domestic violence claims made under VAWA. According to a report from the U.S. Government Accountability Office, 13,000 immigrants made false claims of spousal abuse in 2018 under the federal domestic violence law in order to circumvent immigration laws and gain citizenship in the U.S.

While VAWA expired in 2019, the measure recently was narrowly reauthorized by Congress, with Republicans objecting to several new mandates built into it. One of the new provisions requires men who claim they identify as women and say they have been abused, to be admitted into a shelter for battered women.

The indictments capped a one-year undercover investigation that involved the U.S. Department of Justice, FBI, USCIS, Homeland Security, and other agencies.