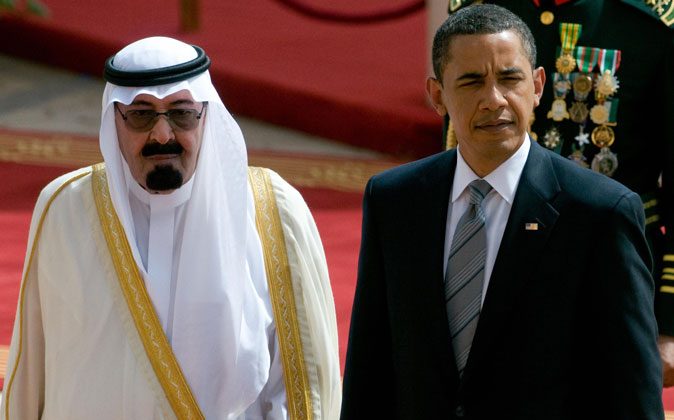 US President Barack Obama and Saudi King Abdullah bin Abdul Aziz al-Saud (L) review the honour gaurd during an arrival ceremony at the King Khaled international airport in Riyadh on June 3, 2009. Obama arrived in Saudi Arabia at the start of a mission to the Middle East where he will reach out to the world's Muslims and promote peace. Saudi Arabia laid on a red carpet welcome for Obama, who is due to hold talks with King Abdullah before heading to Egypt on June 4 to give a much-anticipated address to the Muslim world at Cairo University. (Saul Loeb/AFP/Getty Images)
Opinion

SINGAPORE—Shale oil and gas has been labeled a game changer. Statistics would suggest that, yes, the new technologies and discoveries associated with hydraulic fracking change the energy picture and economic outlook, in particular for the United States, but less so than predictions would have it a year or two go.

The greater impact won’t be on the US economy, but rather US-Saudi relations and stability for the Middle East. President Barack Obama  met King Abdullah March 28, and both leaders recognize that the geopolitical ground shaped by their common interest in stable oil prices has shifted, creating a new imbalance that could spill over into Mideast security policy.

Estimates for the impact on US economic growth vary from 0.2 percentage points per year to a marginal hike of the growth rate. Petrochemical exports have risen threefold from 2006 to 2012, but account for not more than 1.2 percent of US gross domestic product. The trade balance has improved by a modest 0.1 to 0.2 percentage per year, yet still is in deficit to the tune of around 3.5 percent of GDP. The expectations were and still are that shale oil and gas would help bring manufacturing back to the US – re-manufacturing. The figures do not bear such hopes out though. From 2007 to 2009 more than 2 million manufacturing jobs were lost; 600,000 have returned.

Most analyses set the profitability of the technology to extract shale oil and gas at an oil price of US$60 to 80 per barrel. That should put future extraction on the safe side, but so far low hanging fruits have been plucked, postponing the prospect of higher costs. Hydraulic fracking is exempt, totally or partly, from major federal environmental laws such as the Clean Air Act and the Safe Drinking Water Act. These exemptions are not likely to vanish overnight, but environmental concerns are lurking in the background; any alterations will inevitably result in higher costs.

Since the Shah of Iran’s fall in 1979, the world of oil has been governed by a tacit American-Saudi Arabian understanding that keeps a firm grip on Middle East politics. There have been ups and downs, but the partners have never questioned the understanding – until now.

One of the consequences was implicit US support for Saudi Arabia, keeping the Middle East under Sunni Muslim control despite religious trends and demographics in favor of the Shiites in several countries governed by the Sunnis. Obviously, the resentment has grown and over the last decade surfaced, raising the prospect of nothing less than a civil war between these two religious orientations. The Saudis probably, almost certainly, expected the US to intervene in Syria to prevent the Shiites from getting the upper hand. Preparatory talks in February/March for the President Obama/King Abdullah meeting signaled that the two sides were inching closer to reconcile their views, but it is not clear what came out of the summit. The recent US decision to suspend operations of the Syrian embassy indicates a policy shift although its direction may not be obvious. The Russian intervention in Ukraine/Crimea may have made the United States more aware of the need to accommodate Saudi Arabia instead of linking up with Russia.

Observing US dithering and faced with the turmoil in Bahrain, Saudi Arabia gradually has come to realize that the United States is changing course in the Middle East albeit without a clear new course or objective – except that Saudi Arabia does not count in the same way as it used to. And in Iran, while it’s unclear what lies behind the negotiations on Iran’s alleged nuclear weapons, the plain fact that the US is shifting track is one more straw on the camel’s back.

The rising production of fossil fuel including oil is a portent of US self- sufficiency in energy; the forecasts differ substantially as the timing is concerned with a consensus saying 2025 to 2030, but some expect the self-sufficiency happening even earlier. In 2020 the US will have displaced Saudi Arabia as the world’s biggest oil producer. US dependency on petroleum imports from the Gulf has fallen dramatically, close to 20 percent in 2012; Saudi Arabia accounted for 13 percent of total imports in 2012.

A high oil price benefits the United States, at least in the short run, with access to lower energy prices enhancing competitiveness vis-à-vis China, Japan and Europe. How much is open to dispute. Hydraulic fracking is reaching a stage where production costs goes up, requiring a high oil price to be profitable. Considering the high investments in this technology and subsequently in infrastructure, the last thing the United States wants is a fall in oil price pulling the carpet out from under the feet of this technology. On top of that is the lure of future US exports of petroleum products restricted since 1973. Keeping the oil within the US depresses energy prices, benefitting the economy, but in the longer run, it is difficult to see growing production of fossil fuel including oil while still maintaining restrictions on exports. The temptation will become too big to resist. As one of few large buyers and sellers at the same time, the United States will likely want to pursue its own interests and not link up with other producers including other Western producers.

All this is precisely the opposite of what Saudi Arabia wants.

If the oil price stays high, not only will hydraulic fracking continue to be profitable in the United States, but a number of other countries around the world may start using the technology. The European Union is considering whether to allow fracking and, if so, under which conditions to prevent negative effects on the environment. With a higher the oil price, marginal producers are more likely to enter the arena, undermining Saudi Arabia’s position. If the US starts to export crude oil for the global market, it will be a major new player politically and economically, and could make the existing institutional structures like OPEC obsolete, edging the Saudis away from the center of oil diplomacy.

Common interest in the oil price underpinning a US- Saudi understanding is no longer in place; on the contrary, a conflict of interest is apparent.

Seen from the outside, the Saudis have tried to communicate their displeasure to the US, maybe trying to wring another kind of understanding out of the wreckage. This was done explicitly and publicly in October 2013 by Saudi Arabia’s former spy chief and ambassador to the United States, Prince Turki al-Faisal, at the annual Arab-US Policymakers Conference.

The signals ran into a US stone wall. Unless gaps in policies and perceptions are bridged, prospects for future stability of the Middle East do not look good.