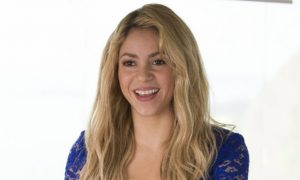 Shakira has beaten Eminem — who has 91.9 million Facebook likes — and Rihanna, who has 89 million, to become the most liked celebrity on Facebook.

The Colombian beauty described the achievement as “unbelievable” after making it to the top spot with over 100 million likes.

Shakira even shared a series of infographics to measure the milestone, which revealed that 100 million people holding hands would be able to wrap around the world four times.