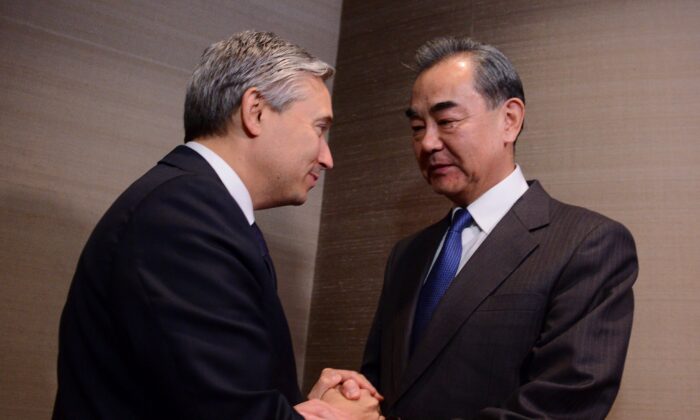 Antagonist regimes use photo-ops with leaders of countries like Canada for propaganda, says former minister and MP
By Adam Field

“You need to know how to move your pieces in a way that you’re going to serve your country and its interests, and not serve the interests of the other country, which is trying to hurt you in every way it can,” Kilgour says.

Images of Trudeau greeting Zarif with a friendly handshake and bowing his head on the sidelines of the Munich Security Conference on Feb. 14 were shared widely by Iranian state media, with critics raising concerns that the prime minister is being used as a propaganda prop by the Iranian regime to claim legitimacy domestically.

Kaveh Shahrooz, a senior fellow with the Macdonald-Laurier Institute, said in a tweet that while he realizes that “leaders sometimes have to shake hands with unsavoury people,” given that Iran recently shot down a plane carrying 176 passengers including Canadians, Trudeau should have avoided a photo-op with the Iranian representative.

Trudeau defended his meeting with Zarif, saying he needs to press Iran to get answers on the plane tragedy.

Back in 2016, the prime minister drew fire for a statement he issued after the passing of Cuban leader Fidel Castro, praising the communist dictator as a “larger-than-life leader” and a “legendary revolutionary and orator.”

His government has faced criticism as well by rights groups for its pursuit of warm relations with the Beijing regime. Most recently Canada’s ambassador to China Dominic Barton said he commends China’s efforts in containing the new coronavirus, despite evidence that the regime wasn’t forthcoming when the outbreak first started and has been discounting the number of cases and deaths, and the fact that Canadian citizens Michael Kovrig and Michael Spavor still remain detained in China.

Kilgour says Canadian leaders should be mindful of how their conduct can be used for propaganda purposes by bad state actors.

He recalls that in the 1980s, as an MP and a member of the Canadian Parliamentary Group for Soviet Jewry—formed in support of the Jewish people persecuted under the Soviet Union—he and fellow MPs were asked to meet with the Anti-Zionist Committee of the Soviet Public, which in reality was an anti-Jewish committee, he said.

Kilgour said he and other parliamentarians at first agreed to the meeting, thinking they would tell them “how strongly we disagree with them,” but they eventually decided against it after they were advised it would only serve as a propaganda opportunity for the Anti-Zionist Committee.

“They will take a photograph of you coming in to shake hands with them, and they will use the photograph as pure propaganda, and nothing you say criticizing them will be heard,” Kilgour said.

In the aftermath of Russia’s annexation of Crimea from Ukraine in 2014, Prime Minister Stephen Harper responded to Russian President Vladimir Putin’s extension of his hand for a handshake on the sidelines of the 2014 G20 summit in Australia by saying, “I guess I’ll shake your hand but I have only one thing to say to you: You need to get out of Ukraine.”

A year before, Harper boycotted a Commonwealth summit in Sri Lanka over human rights violations by the country’s government.

Harper also famously refused to attend the 2008 Olympic Summer Games in Beijing, despite about 80 other world leaders joining the event.

Yet Harper, whose government started showing warmer relations to China in the final years of his tenure, attended an APEC summit in China in 2014, despite initially not planning to go, saying Chinese officials “really wanted me to be here” for the launch of the summit.

Charles Burton, an associate professor of political science at Brock University, said in an op-ed in The Globe and Mail at the time that there were many photographs of Harper and Canadian ministers accompanying him on the trip in Chinese media, showing them “laughing and smiling and giving the impression that they thoroughly enjoyed interacting with leaders of the Chinese Communist Party.”

“The real bottom line is that the Chinese leadership got the affirmation of political legitimacy that they wanted from Canada,” Burton said.

Kilgour says he has seen many situations in which the “goodwill” of Canadian leaders gets taken advantage of by governments with bad intentions.

He adds that Canadian leaders can still be polite to people without allowing an opportunity for photographs of them to be used for propaganda.

“You don’t have to be rude when refusing to shake hands with somebody, you can just brush over or say something when he puts out his hand, and look in a different direction,” Kilkgour says. “You just have to show him that you’re not going to get sucked into a photo-op that’s going to hurt Canadians.”