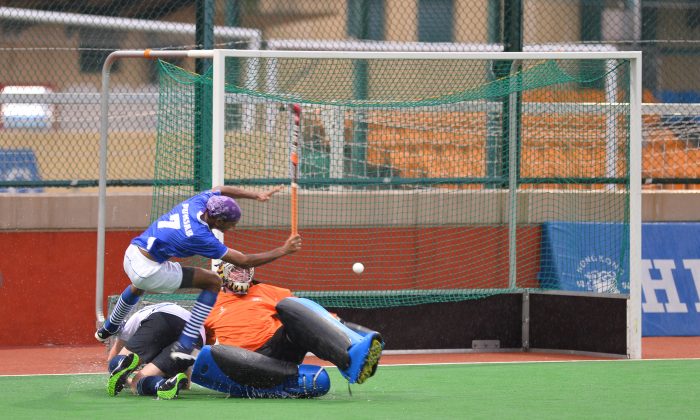 Mohammad Nadeem of Punjab-A made a spectacular finish to his run into the HKFC-B circle lifting the ball over the HKFC goalkeeper to score during their 4-0 win last Sunday Sept 22, 2013. The match was abandoned after five minutes of the second half due to Typhoon Usagi. (Bill Cox/Epoch Times)
International

Shaheen Stepping Out Of The Shadows

Super Typhoon “Usagi” was expected to be a disruptive influence on Premier League Hockey and other Hong Kong sports last weekend Sept 21 and 22.

While Hockey and Rugby were played, Soccer matches were all cancelled on Sunday.

But the storm did not arrive until late on Sunday evening, and the wind and rain during the day was not too disrupting and all of the hockey fixtures going ahead—it just foreshortened the late afternoon matches.

A full set of six matches were played in the Men’s Premier League, four at King’s Park, one at Happy Valley (HV1) and one at the Football Club.

Shaheen’s win over SSSC-A indicates that the new team development tactics employed by Shaheen last year are beginning to pay off – at the same time they still have some experienced players to hold the team together and spearhead the attack.

Stalwart player for Shaheen and Hong Kong international, Arif Ali explained to the Epoch Times that they were “without our key striker Senachi [Asghar Ali]”, but that the “boys stepped up” with most of the players under 21 years of age showing great promise for the future.

“We were well prepared for the match mentally, physically and tactically,” said Ali.

“Boys were shoulder-to-shoulder and toe-to-toe with them [SSSC-A].

“Our young forwards B.C. Chow and Raymond Yu [who was just selected for EAG] were tearing their defence apart and Stanley [To] and Sky [Chung] were stopping their key midfielder.

“Most important, our defence has improved from last year and given us more speed at the back. With Chris [Tso] and Usman [Ali] overlapping non-stop, creating a lot of problems for them. Howard Leung in goal was in top form,” he explained.

“Our new player Rafi [Shahzad] was partner with Mustafa [Mohammed] at the back and stopped their last year’s top scorer from any chance to score field goals,” he concluded.

The Premier women’s fixtures are very sparse at the moment with only one or two matches scheduled each week. Debby Tang of Shaheen discussed the fixture schedule with the Epoch Times.

“Recently there are just a few games, mainly because the Ladies Hong Kong team is playing the Asia Cup tournament in KL [Kuala Lumpur, Sept 18-28]; and will participate in the East Asian Games in China [Oct 4-14]. The squad has players mainly from three or four teams in the premier, that’s why only few premier games could be arranged,” she explained.

“Fixtures will resume back to normal by mid-October.”

The only match played last weekend was between Hong Kong Football Club-A (HKFC-A) and Club de Recreio-A (Recreio-A) played at the HKFC ground on Saturday Sept 21. Club-A with a number of changes to their normal team won the match 5-0.

Although Recreio-A were under quite a bit of pressure at times they still managed to hold Club-A out with some good defending and goal keeping. Club-A on the other hand were not at full strength, but Dawn Strachan moving up from HKFC-B team playing in a new role up front instead of playing in her normal central defending position showed her strong all-round capability.

There are no clashes between the top teams again next week, but there are a number of interesting ties to watch.

In the women’s matches scheduled, newcomers to the Premier League, Dutch play HKFC-B that will give a better idea of the new club’s standard.

In the men’s, SSSC-A against Valley-A looks to be a good fixture as these teams tussled for mid-table positions throughout last year’s competition. Meanwhile, the Punjab-A match against SSSC-B will also show if SSSC-B’s win this week over KCC-A was a true reflection of their capability. Another good encounter should be HKFC-B against newcomers to the league KNS-A. Shaheen have an even bigger task to complete in their coming match when they meet Khalsa.