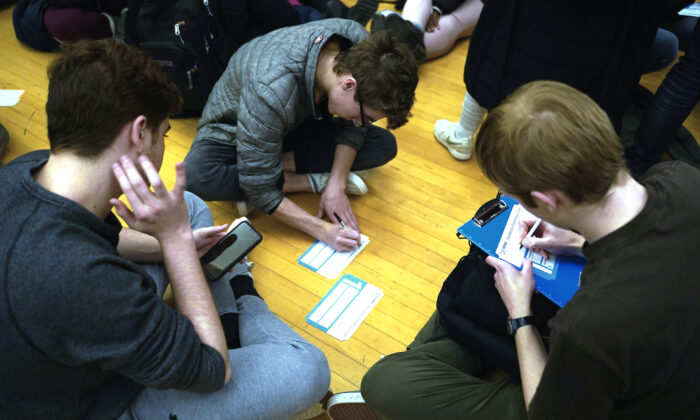 Voters at the Democratic caucus at the Iowa Memorial Union on the University of Iowa campus in Iowa City on Feb. 3, 2020. (Cara Ding/The Epoch Times)
By Zachary Stieber

The CEO of the company that created an application that failed during the Iowa Democratic caucuses this week said that employees at the company feel bad about what happened.

“I’m really disappointed that some of our technology created an issue that made the caucus difficult,” Shadow Inc. CEO Gerard Niemira told Bloomberg News. “We feel really terrible about that.”

Iowa Democratic Party Chair Troy Price blamed a “coding issue” in the Shadow app for the delay in releasing the caucus results. Only 71 percent of the results had been released as of Wednesday afternoon. Former South Bend Mayor Pete Buttigieg, 38, had a narrow lead over Sen. Bernie Sanders (I-Vt.), 78.

The state party won’t release a timeline for releasing the rest of the results.

Shadow is a mysterious company that shields its employees, investors, and officers from public view. None are listed on its website and only a few employees list the company on their LinkedIn pages. The website lists no staff information but says employees were veterans of Hillary Clinton’s and Barack Obama’s presidential campaigns. Niemira, the CEO, worked on Clinton’s 2016 campaign, as did several other high-level officials, including Ahna Rao, a product manager, and Krista Davis, the chief technology officer.

Shadow was formed in part by investments from ACRONYM, a progressive nonprofit that championed the company repeatedly on social media before the Iowa caucuses and said it was Shadow’s “sole investor.” After the caucuses, ACRONYM officials tried distancing the nonprofit from Shadow, saying the nonprofit was only one of multiple investors in the company.

Before being CEO of Shadow, Niemira was chief operating officer and chief technology officer at ACRONYM. Shadow would “exist under the ACRONYM umbrella,” Niemira wrote in a January 2019 blog post announcing the nonprofit’s investment in the company. The post was taken down after the caucuses.

Tara McGowan, CEO of ACRONYM, said last year that the nonprofit “acquired” Groundbase, a company Niemira used to develop Shadow’s technology. “Meet the Shadow team,” she wrote in a tweet at the time, sharing a photograph of staff at the company.

ACRONYM said on its website the day before the caucuses that it “launched Shadow.” The site was changed and now says the nonprofit “invested” in Shadow. Business and tax records showed Shadow and Acronym listed at the same address in Washington. The address is a WeWork co-working location.

McGowan also posted a video that Buttigieg posted to Twitter Monday in which he asked people to vote for him.

Buttigieg suggested he was victorious later Monday before the results were released.

Shadow, which has no contact information on its website, issued a statement on Feb. 4 saying company officials “sincerely regret the delay in the reporting of the results of last night’s Iowa caucuses and the uncertainty it has caused to the candidates, their campaigns, and Democratic caucus-goers.”

The company said “the underlying data and collection process” was sound and accurate “but our process to transmit that caucus results data” to the Iowa Democratic Party was not.

The lessons learned from the situation will be applied in the future, the company said. The Nevada Democratic Party, which paid Shadow last year, said after the debacle that it will not use Shadow’s app for its upcoming Democratic caucuses.