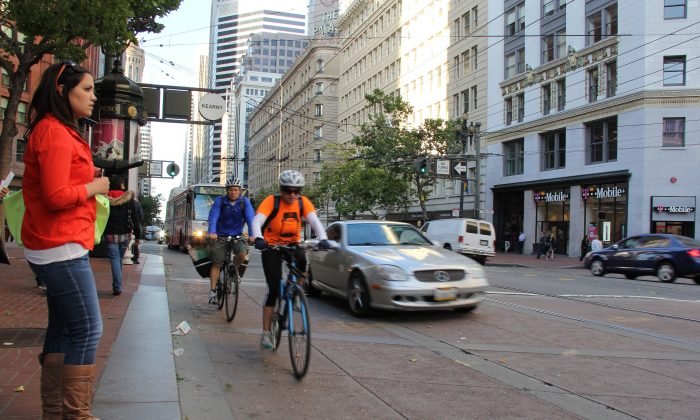 SAN FRANCISCO—When Zack Stender signed the lease for a bike store on Market Street a few years ago, he expected the transformation of San Francisco’s major thoroughfare to be on the way soon, with the launch of the Better Market Street project the same year.

The ambitious revitalization effort for the city’s troubled street was expected to begin this year. But Stender has not seen much happening on the ground—apart from the repainting of bikeways and a five-block repavement earlier this month.

Stender said he still watches tourists “get lost and scared, daily” on his stretch of Market, between 6th and 7th streets—part of an infamous area of Market Street where drug use and crimes are all-too-prevalent.

“It isn’t that grand boulevard that everyone wants to see,” he said.

Stender was not the only one who expressed disappointment and frustration at a hearing on the Better Market Street project at the Board of Supervisors Land Use and Economic Development Committee Monday.

Supervisors Scott Wiener and David Chiu have called on representatives of city departments to discuss the slow progress of the $250 million initiative, led by the Department of Public Works.

Wiener said he is frustrated with the delay of “one of the most important plans that’s moving forward in the city right now” and with the insufficient cooperation among the five agencies involved.

The project sets out to “re-establish the street as the premier cultural, civic, and economic center of San Francisco and the Bay Area,” the Better Market Street website states.

In a comprehensive makeover, the plan aims to address several issues the street faces, and transit concerns stand at the forefront. The redesign is focused on the eastern section on Market from Octavia Boulevard to The Embarcadero.

As anyone knows who has ventured on Market, competing for the road are cars, taxis, delivery trucks, and city transit—historic streetcars, trolleys, and buses—as well as bikes. In addition, a quarter of a million pedestrians pass through here every day, according to pedestrian advocacy group Walk SF.

The result is not just increased travel time, it also makes Market a dangerous place to be, a high-injury corridor for pedestrian traffic accidents.

John Rahaim, director of the Planning Department, explained the delay with unexpected complexities that arose, as well as the steep learning curve for the departments involved. “We are learning as we go,” he said.

Wiener suggested launching short-term trial projects as soon as possible instead of holding off the construction work until 2017, the current scheduled start-date. This would bring immediate safety benefits to cyclists and pedestrians.

Edward Reiskin, director of transportation at the Municipal Transportation Agency, said that while the department is eager to implement these, many of them don’t have dedicated funding sources.

Since 2001, when Chiu sponsored a resolution urging MTA and other departments to begin remaking Market Street, two public workshops have been held and three different design options developed.

“It’s getting to be a little ridiculous. This has to move along,” said Ron Miguel, former president of the Planning Commission and chair of a group tasked with reviewing design proposals.

The group has not met for half a year “because there’s nothing more to look at until people make up their minds,” Miguel said. He said he would not be surprised if the actual construction work is pushed back to 2020.

All three design options seek to make traveling safer and more reliable, with improved intersections, better lighting, upgraded Muni boarding areas, and restrictions to cars, while also making the street more inviting as a public space, with improved landscaping for plazas and sidewalks.

One design proposal, which includes shifting bike traffic to Mission Street by giving riders a dedicated lane, has as met with much criticism, particularly from cycling advocates.

If riders will be “voting with their wheels to go down Market Street, it would be foolish to do so,” said Nik Kaestner, director of sustainability for the San Francisco Unified School District.

The next public workshop will be held on July 17, while Wiener said he will schedule the next hearing in about three months.