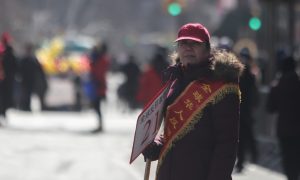 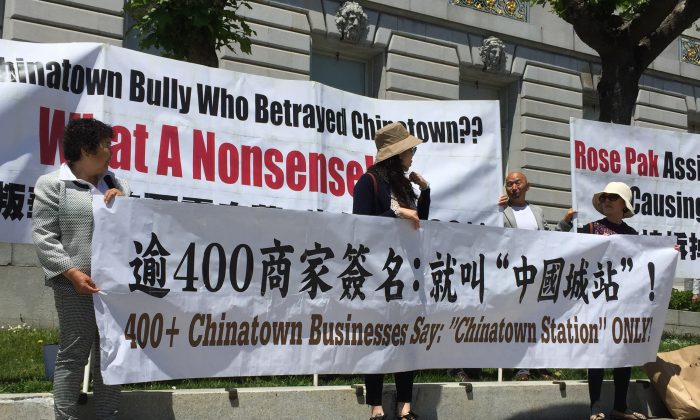 Pak, who died in 2016 at the age of 68, had deep ties to the Chinatown community and was seen as a political power broker for the Chinese communist regime in San Francisco.

In recent months, the San Francisco Board of Supervisors and SFMTA continued to push for naming the new Chinatown station after Pak. This issue has now drawn the attention of the Human Rights Law Foundation (HRLF), multiple scholars, and China experts.

HRLF is a nonprofit organization “established to deter human rights abuses, develop human rights legal standards, and educate the public on the cultural forms and institutions that undergird the practice of persecutory campaigns,” its website states.

In a letter to the SFMTA board members, HRLF expressed concern about naming the subway station after Pak, due to her ties with China’s communist regime. The letter was sent by email to various media organizations on Aug. 19 and was reported by several media prior to SFMTA’s meeting on Aug. 21.

HRLF opened the letter by stating: “Congratulations on the new subway stop in Chinatown. That is a huge accomplishment, for which Rose Pak may deserve some credit, though not the high honor of having her name immortalized on a San Francisco landmark.”

The letter added that “naming a geographic feature after an individual deserves true greatness,” something that many people believe Pak did not represent.

HRLF gave the example of Liu Xiaobo—a philosopher, poet, and human rights activist who won the Nobel Peace Prize—as someone who is worthy of being immortalized.

The San Francisco Chinatown community also briefly advocated for the station to be named after Sun Yat-sen, who was the founding father of the Republic of China (also known as Taiwan) and built the first Democratic Republic nation in Asia.

However, the SFMTA’s policy on public transit station names indicates that stations should be named after geographical locations rather than people. Thus, the most widely supported name for the station was simply “Chinatown Station.”

The HRLF stated, “We would suggest naming the subway stop as simply Chinatown, which represents all the great diversity of the neighborhood over the many decades of its flourishing.”

Many people were against naming the station after Pak because of her controversial ties with the Chinese Communist Party (CCP). For years, Pak worked as a power broker among the San Francisco Bay Area’s Chinese American community to influence politics.

HRLF, along with scholars and China experts, stated in the letter that the CCP engages in unethical activities and suppresses groups that stand for freedom and democracy, conflicting with the values of the United States.

“China uses influence tactics, especially through its United Front Work Department, to compromise U.S. democracy and democracies around the world,” HRLF stated in the letter.

“The most horrendous examples of this are in East Turkistan, where 1–3 million minorities have been locked up due to their beliefs, in Tibet, where Buddhist monasteries are torn down, [in the persecution of] Falun Gong, who are subject to forced organ transplants, and in Hong Kong, where the hopes of over a million people who have marched to demand freedom and democracy from the Chinese Communist Party are being suppressed through police brutality.”

HRLF’s letter stated that Pak was also known to share Beijing’s use of the terms “overseas Chinese” or “overseas compatriots” rather than “Chinese Americans” to refer to people in Chinese communities in the United States. Some scholars have described this phrasing as a form of political manipulation.

Pak was also recognized as the “de facto” head of the Chamber of Commerce, which allowed her to ban certain Chinese Americans from participating in San Francisco’s annual Chinese New Year parade. Only groups that were aligned with the CCP’s interests were given the right to participate in major city events.

According to FBI archives, Pak was investigated twice, once for illegal housing purchases and another time for her ties with the CCP.

Terri Marsh, executive director of HRLF, one of the 14 individuals who signed the letter, coordinates and manages the legal and policy work of HRLF, works on local and international human rights cases on behalf of persecuted groups from China, and advocates for dissidents in China through human rights reports and projects.

Anders Corr, who also signed, worked in military intelligence and is now publisher of the Journal of Political Risk, conducting field research in various countries around the world. Mark Eades, an Asia-based educator and independent researcher, also signed the letter.

Other signees include professors from the University of Pennsylvania and Georgetown University, the former director of the American Institute of Taiwan, a retired naval officer, a retired Department of Defense employee, China studies research fellows, a human rights lawyer, independent authors and researchers, and human rights activists from across the United States.

Over the past few months, San Franciscans held protests and have spoken at San Francisco City Hall public hearings to voice their opposition to naming the subway station after Pak.