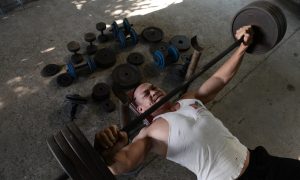 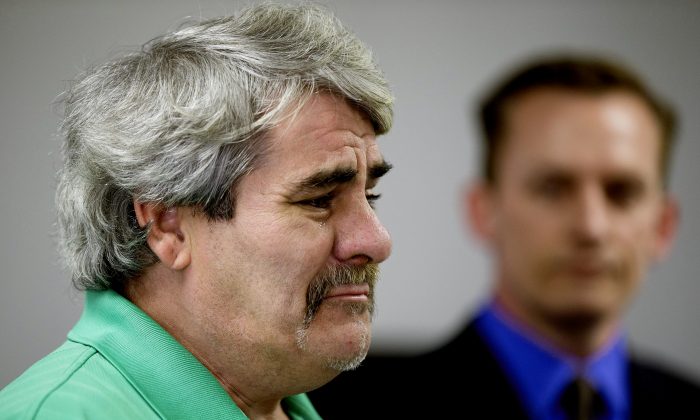 James Flavey Coy Brown talks during a news conference at the American Civil Liberties Union headquarters in Las Vegas, Nev., June 12, 2013. Brown had been discharged from a mental health care facility in Las Vegas and given a one-way bus ticket to Northern California, where he arrived without money and identification in a city where he didn’t know anyone and had never been. (AP Photo/Julie Jacobson, File)
Northern California

SAN FRANCISCO—City Attorney Dennis Herrera has had enough. After Nevada allegedly dumped two dozen of its psychiatric patients on San Francisco streets, and no talks with Silver State officials were answered, he is now playing the legal card.

Herrera is considering pursuing a class-action lawsuit on behalf of California local governments against Nevada’s “unlawful practice of transporting patients who suffer from mental illnesses and other ailments to locations in California.”

The city attorney sent a demand letter to Nevada Attorney General Catherine Masto on Tuesday. The letter alleges that almost 500 patients have been discharged from a state-run psychiatric hospital in Las Vegas since April 2008 and received one-way bus tickets to California.

Many of them had no connections to the destination city, with no family members to take care of them there, and no prior medical arrangements having been made.

The 24 patients sent to San Francisco had no money, were homeless, and still in need of psychiatric aid, an ongoing investigation by Herrera’s office found.

Within a short time, these patients required emergency medical assistance, some within hours of arrival. San Francisco has had to pay at least $500,000 for medical care and housing, Herrera’s office estimates.

“Nevada’s busing of such patients to California constituted a misappropriation of the destination cities’ and counties’ resources for health care and basic necessities, which Nevada was legally obligated to provide to its own indigent residents,” Herrera wrote.

Nevada can avoid the lawsuit by reaching a settlement to fully reimburse California cities and counties for costs incurred in dealing with the patients, while Nevada needs to adopt binding interstate transfer protocols, Herrera wrote. He gave Masto 20 days to reply.

The patients in question were released from Rawson-Neal Psychiatric Hospital in Las Vegas, the only state psychiatric hospital for adults in southern Nevada.

Herrera alleges that the hospital was well aware that the 24 patients sent to San Francisco had no connection to the city, and even directed the patients to seek care and housing upon arrival.

He called the Rawson-Neal practice of transporting patients without escort, sufficient medication, food, and no arrangement for their arrival “inhumane and unacceptable.”

Since most patients are sent by Greyhound Lines buses, the practice has been dubbed “Greyhound therapy.”

A Nevada Health and Human Services summary from April reported that 31,043 people were admitted to Rawson-Neal during a five-year span, and that 1,473 patients were provided bus transportation out of the state.

The review identified 10 cases where documentation was insufficient to determine whether hospital staff had checked to ensure the released patient had family or a support system waiting for them in the new state.

San Francisco’s letter to Nevada’s attorney general comes after a psychiatric patient, 48-year-old James Flavey Coy Brown, filed a federal civil rights lawsuit in Nevada, alleging that Rawson-Neal gave him a one-way bus ticket for a 15-hour ride to Sacramento. He arrived disoriented, with no money, identification, or contacts.

Brown said a Rawson-Neal doctor suggested he go to “sunny California,” because they “have excellent health care and more benefits than you could ever get in Nevada,” according to the Sacramento Bee. He instructed him to call 911 as soon he arrived.

The suit filed by Brown seeks class-action status on behalf of as many as 1,500 people his lawyers claimed were bused from Nevada to other states.

The legal action followed a Sacramento Bee report on Brown’s experience, which spurred federal and state investigations. The city of Los Angeles has also launched a criminal investigation.