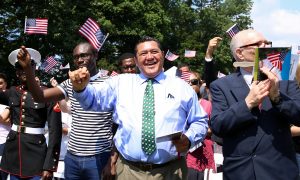 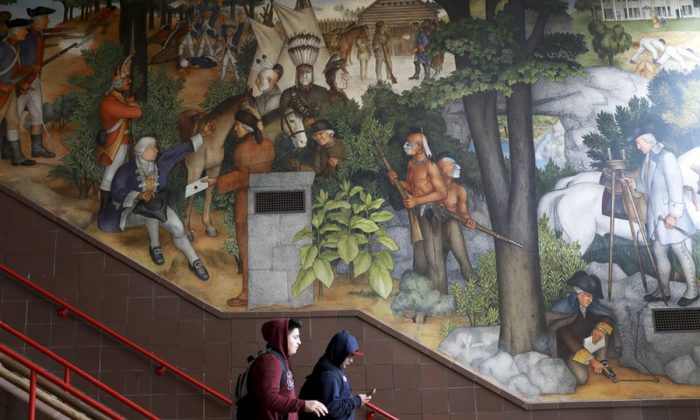 A pair of students walk past a historic mural that includes slaves and a dead Native American at George Washington High School in San Francisco. The San Fransisco school board unanimously voted on June 25, 2019, to destroy a controversial mural displayed in a public high school. (Yalonda M. James/San Francisco Chronicle via AP)
Politics

The San Francisco Unified School District Board of Education has voted to make “Life of Washington” mural invisible from public view without destroying it.

In a press release issued on Aug. 14, the San Francisco Unified School District Board of Education (SFUSD) said the board voted four to three to “authorized staff to develop a project, assessing a range of alternatives” to remove the mural from public view.

“Life of Washington” was commissioned by the government of the United States in 1936 under a New Deal-era art program and was painted in fresco style by late Victor Arnautoff, a Russian immigrant.

In addition to depicting Washington as a soldier, surveyor and statesman, the 13-panel, 1,600-square foot mural at George Washington High School depicts images of white pioneers standing over the body of a Native American and slaves working at Washington’s Mount Vernon estate in Virginia.

The controversial mural will be removed from public view by using solid panels or equivalent material. It will, however, be accessible to art and art historians in a digitized form.

“Where we all agree is that the mural depicts the racist history of America, especially in regards to African Americans and Native Americans. It is important that we all share the agreement and acknowledgment of racism, discrimination, and the dehumanizing of people of color and women in American history,” said School Board President Stevon Cook in the press statement.

The controversy was around the objectionable content depicted in the 13-panel mural. Earlier this year, the district had set-up an 11-member community advisory committee to address public concern around the mural located in the administration building at George Washington High School.

San Francisco’s school board voted not to destroy, but rather to cover up and preserve, a mural depicting slavery, a murdered Native American and George Washington. https://t.co/fd1pS1gqEu

“This is an issue that is dividing our city when we really need to be coming together in service to our students. I know this alternative is harmful to those who wanted to paint it over, and there are people in the preservation community who think we’re going too far by covering the mural,” said Cook.

Fresco murals are done using dry powder pigment mixed into wet plaster on a wall and once the plaster dries the mural is permanently etched into the wall.

The board amended the previous June 25 decision to paint over the mural. “Our schools need to be places where all students feel safe, seen and supported,” said Cook.

George Washington High School has about 2,000 students. Nearly all are people of color and many come from low-income families. As early as the 1960s, some students argued the mural’s imagery is offensive and racist. Renewed opposition emerged in recent years amid protests in the South and elsewhere over statues honoring Confederate heroes.

Arnautoff, a Russian-born communist and social critic, was hired with Federal Art Project funds as part of President Franklin D. Roosevelt’s New Deal, a series of government programs meant to help lift the country out of the Great Depression of the 1930s.

The SFUSD educates over 57,000 students every year and is the seventh-largest school district in California, according to its website.