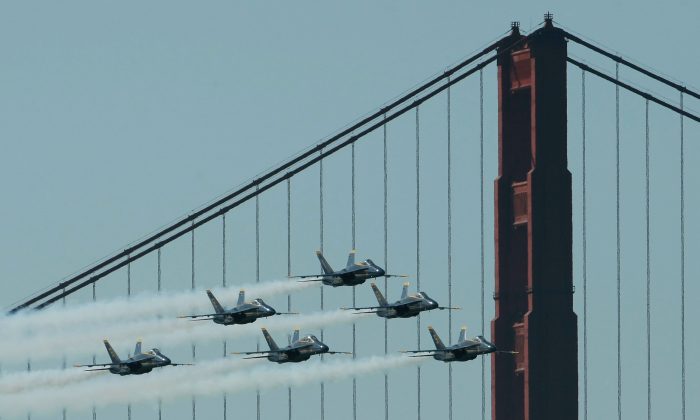 F/A-18 Hornets of the U.S. Navy Blue Angels fly by the Golden Gate Bridge as they practice their Fleet Week performance in San Francisco. San Francisco kicks off its annual Fleet Week celebration with the parade of ships and an air show featuring the Blue Angels. (Justin Sullivan/Getty Images)
Northern California

SF Prepares for Blue Angels as Fleet Week Gets Underway

The weeklong event, which welcomes dozens of U.S. Navy vessels and aircrafts, kicked off Monday, with the main attraction, the Blue Angels air show, happening Oct. 5  through Oct. 7.

On Oct. 4, between 1 and 5 p.m., the pilots, famed for their daredevil mid-air tricks, will begin their practice session, taking off from the Oakland International Airport.

Then, on Oct. 5  through Oct. 7, the pilots will take over San Francisco skies between 12 and 4 p.m. for the air shows.In addition to the air shows, Fleet Week attendees can also tour the multiple military vessels that have docked along the city’s waterfront.

With more than a million people expected to show up for the three-day festival, most viewing it from Aquatic Park or Marina Green, San Francisco city officials are hoping to keep visitors safe.

“As one of the most popular events our city hosts throughout the year, Fleet Week brings unique challenges for those in the public safety community,” San Francisco Police Chief Bill Scott said in a statement.

“We ask the public to stay vigilant, to mind your belongings and to not leave valuables behind, especially in your vehicle. As always, if you see something, say something. If something seems out of place or suspicious, please call 911 to report it to authorities,” he said.

In a statement, U.S. Coast Guard Capt. Tony Ceraolo said, “We’re excited about Fleet Week and we want everyone to have a great time, we just want to make sure they do so safely. As always, safety and security are our top priorities and we’re taking the appropriate measures to ensure those goals are met.”

In addition to providing maritime security for Fleet Week, the U.S. Coast Guard will have several of its cutters participate in the event.

In order to accommodate the large number of ships coming into the Bay this week, the Coast Guard will also restrict maritime traffic between

Thursday and Tuesday in most of the central Bay, from the Golden Gate Bridge, south of Alcatraz Island, to just south of the Bay Bridge.

In addition, a 500-yard protective zone will be enforced around each docked military vessel, Coast Guard officials said.

More information about boating safety, tickets, and the day-to-day Fleet Week events can be found here.