3
The Emergency Must Be Ended, Now
12hr
sharecomments 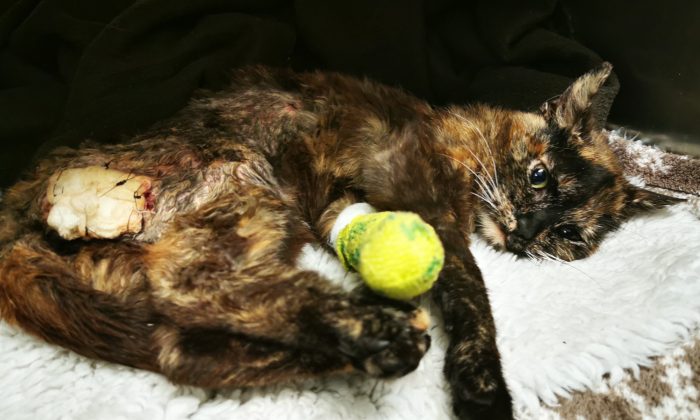 The Royal Society for the Prevention of Cruelty to Animals (RSPCA) is seeing an outpouring of sympathy and offers to help rehome a sexually abused kitten after bringing its plight to the spotlight.

On June 3, the RSPCA reported on its website that a severely abused 9-month-old cat was found in Woking, a large town in Surrey located southwest of London, and made an urgent appeal to the public for information about this heartbreaking ordeal.

The tortoiseshell cat was found near Bagshot Road on June 2 and brought to the RSPCA. She had burns all over her body and showed signs of sexual abuse.

“We’ve never seen a cat so abused before and it’s heartbreaking that this has happened to her,” said Liz Wood, deputy manager at the RSPCA’s Millbrook Animal Centre. The cat had a number of wounds that were “full of maggots,” and an improvised splint on her front right leg, and thus she was unable to stand by herself when she was found. Unfortunately, the vets also believe that the candle wax on the cat’s tail might be from the burns.

Despite her injuries, Wood praised her as being “very bright and a little fighter.” The staff named her “Minnie” after her small size.

What kind of heartless monster could do such a thing.

The news of this poor little cat spread on media networks and through social media, with many expressing outrage at Minnie’s plight. One called the perpetrator “truly abhorrent”, while another said this was “monstrous.”

A ‘sexually abused’ kitten covered in burns has been rescued after being dumped in an alley. The cat, who vets have named Minnie, was found with a makeshift splint on her front right leg & is now unable to stand.https://t.co/3earb7Wakv

The police are also on the hunt for the “Woking Cat Rapist,” according to the Sun.

Recovering From the Abuse

Claire Jones, cattery supervisor at Millbrook Animal Centre, believed Minnie would recover from her physical injuries but was uncertain if she would recover completely from the mental trauma, according to Surrey Live.

“It’s so hard to tell,” Jones said. “We don’t know exactly what has been done to her or how long the abuse went on for and whether it was an ongoing thing or just a one-off.”

However, the signs are positive. Jones observed Minnie was starting to trust people. “She likes being tickled under the chin and there was ever so small purr from her this morning,” Jones said.

***APPEAL FOR INFORMATION***A nine-month-old tortoiseshell cat has been rescued from Bagshot Road, Woking, Surrey. Minnie, as she's been named, came in with burns all over her body, maggots in her wounds, signs of sexual abuse and and a makeshift splint on her front right leg. If you know anything about Minnie, we urge you to call our Inspectorate Appeals Line on 0300 123 8018. Read more: https://www.rspca.org.uk/whatwedo/latest/news/details/-/articleName/urgent-appeal-after-severely-abused-cat-found-in-woking

Minnie Gets Sympathy and Support from the Public

Minnie is expected to remain at Millbrook Animal Centre while she recovers, but the RSPCA has already received hundreds of offers to rehome her and “lots of yummy food” donated to her as well.

On their Facebook page, Millbrook Animal Centre expressed their gratitude for the numerous well wishes and gifts for Minnie they received but warned that Minnie “is only just starting the long road to recovery and faces many months of rehabilitation” and thus would be unavailable for rehoming while she recovers.

***Update re Minnie***We are overwhelmed by all your kind wishes and gifts for Minnie. She is only just starting the…

Please contact the RSPCA at 0300 123 8018 if you know any information regarding Minnie’s abuse.

We hope Minnie has a speedy recovery.