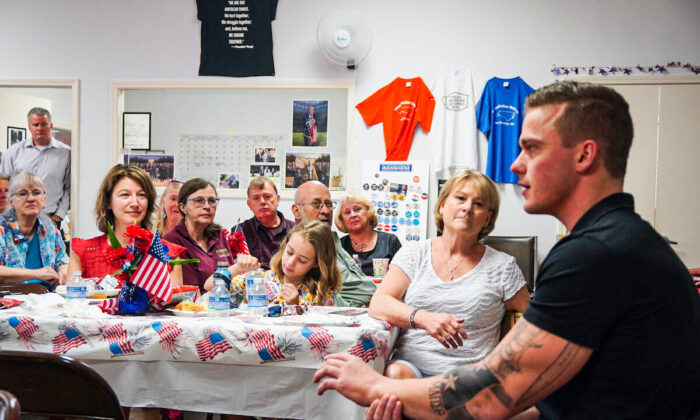 While constituents enjoyed an ample Southern smorgasbord, the candidates each gave brief speeches on their positions. The atmosphere was casual and friendly overall.

He cited the recent creation of President Joe Biden’s “Disinformation Governance Board” as a demonstration of how Democrats have tried to control free speech.

“If we give them emergency powers, they will create an emergency, so they can take more power,” he said of Democrats. “And if we sacrifice liberty on the altar of safety, then we deserve neither.”

Despite their different contexts, local and national office candidates had much in common on policies.

North Carolina incumbent state Rep. David Rogers and Cawthorn agreed that the state’s last-minute electoral redistricting was unconstitutional. The North Carolina Supreme Court ruled that the maps were unfair to Democrats and changed them only three months before the state’s primary election.

This map will likely result in North Carolina going from eight Republicans and five Democratic representatives to seven Republican and six Democratic districts and one wild card district.

Cawthorn told The Epoch Times that North Carolina’s biggest problem is a division within the Republican Party.

“In my opinion, the biggest problem in North Carolina is you have this undercurrent of the establishment versus the hardcore conservative populist libertarian-leaning conservatives that are really stepping out,” he said. “You get guys like Mark Robinson; you have guys like myself. Our Senate race is incredibly important.”

Rogers suggested that North Carolina Republicans impeach state Supreme Court judges who supported the last-minute redistricting. Although Republicans likely lack the numbers needed to vote the judges out of office, an impeachment trial would effectively suspend them from office.

“We could sit them on the sidelines for a while if we just impeach them,” he said.

Two of the judges who contributed to the redistricting will be up for reelection in 2022.

“I love Marjorie Taylor Greene. Isn’t she wonderful?” Sluder asked voters. “Seriously, she can take the heat for the right reasons.”

The biggest local issue for Polk County’s candidates was the introduction of age-inappropriate books to local schools.

School board candidate Jason Allen said local parents discovered that the local school district included books with extremely pornographic passages. Although Polk County is a conservative county in a conservative district, it has a liberal school board, according to Allen.

“They’re trying to make the kids grow up way too fast, even beyond the point of what most adults would even find appropriate,” he said.

But this situation may change. Several conservatives have announced that they would run for positions on the school board to fight against the introduction of sexually explicit books for the state’s children.

“It’s our right, as a parent, to know what’s going on with our kids,” Allen said.

The ballot doesn’t list school board candidates with a political party.

But Allen and several others are running for the board with Republican support.

After the event, several voters said the event had helped them draw conclusions regarding the candidates.

He noted that school board candidates Allen and German Ruiz also caught his attention.

On the issues, Brookfield said he was most concerned about illegal immigration and inflation.

Local resident Jean Brewer said the event narrowed her choice for the district’s congressional representative to either Cawthorn or Michele Woodhouse. Woodhouse didn’t attend the event.

“There’s been some issues with him as a young person, and he’s got some uphill climbing to go on those issues,” she said, referencing a string of misconduct accusations against Cawthorn.

Brewer said she believes that Cawthorn understands how Congress works, but she also likes Woodhouse when she speaks.

“I wouldn’t be disappointed with any of the people running.”