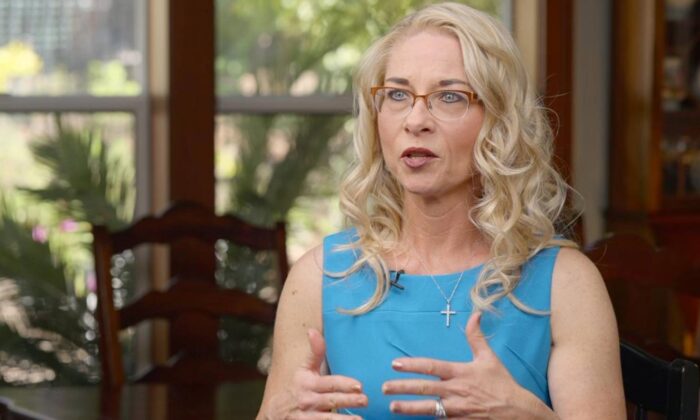 Rebecca Friedrichs, founder of For Kids and Country (Crossroads/Screenshot via The Epoch Times)
Education & Family News

Curricula that sexualize children have been pushed by teachers unions in American schools with the goal of undermining the family structure, said Rebecca Friedrichs, a teacher and the founder of For Kids and Country.

When Friedrichs was about halfway through her 28-year career as a teacher, she became a union representative in her school district, which gave her insight into how teachers unions operate.

“That’s when my eyes were really opened that these unions were not there to defend teachers in any way, shape, or form,” Friedrichs said on EpochTV’s “Crossroads” program.

Unions fund an agenda to divide America, which they characterize as progressive but what Friedrichs calls regressive. They sexualize children as a way to undermine the family structure, she said.

Another way to undermine the institution of the family is the promotion of the gender ideology by teachers unions. The ideology is based on the idea “that there is an unlimited number of genders” and it is taught to children as early as preschool, she said.

Teachers are told by union activists to teach students that their gender may be different from their biological one, that kids have to figure out what their gender is, and the gender can change every day, thus undermining children’s identity and making them confused, Friedrichs said.

Teachers unions and their special interest groups also instruct teachers not to tell parents if their child wants to be known by a different gender at school, and encourage those students not to tell their parents, undermining parental authority, she added.

“We’re in a war right now for our children, because of teachers unions and other special interest groups that think that children belong to the state,” she said.

California enacted the Healthy Youth Act in 2016 that requires schools to provide “comprehensive sexual health education.” The legislation was sponsored by the American Civil Liberties Union (pdf), and the California Teachers Association was among the measure’s supporters.

Friedrichs said she reviewed all six curricula, which were approved by the state Department of Education to implement in California, and her opinion was that “they’re all equally pornographic.”

“Any parent who actually would see these curricula would be screaming and fighting against it and wouldn’t want their child to be a part of it.”

If a teacher refuses to teach this sexuality education, the new law stipulates that unqualified teachers need to be replaced by experts such as Planned Parenthood, Friedrichs said.

Friedrichs met with teachers who were serving at the national level of the union and “trying to fight against the sex education that the unions had been pushing for 30-some years.” She wrote the book “Standing Up to Goliath” about the battle.

Those teachers wanted to protect the children, “but they were barred from committees.”

“They were spit upon. If they’d go up to speak on a platform, someone would block their way when they were trying to get up to the platform,” Friedrichs said. “This is mafia tactics.

“But those teachers don’t know that their union is the one pushing it into our schools, lobbying for it, helping to write the laws, putting people into office who are pushing these laws.”

Through pushing children’s sexualization, the unions make teachers look bad “because the American people are starting to think that teachers are these radicalized, horrible people,” she said.

“These forces who have gotten into our schools through these unions don’t want us to have an educational system that’s excellent.

“[They] don’t want our children to be moral, they want … to upend the whole structure of a free republic and change us to a socialist country or a communist country.”

America’s Founders believed that the only way a free republic can be kept is to have a well-educated and moral citizenry that can self-govern, she said. Those who infiltrate teachers associations want to undermine the republic by destroying the educational system and its morals.

An example of their adverse activity is removing phonics, a method of teaching children how to read and write, from the school system and replacing it with a whole language approach, Friedrichs said.

As a result, “all of a sudden, a lot of our kids can’t read, and they have dyslexia and other problems. [They] never would have had those problems had we not removed what was tried and true,” she said.

“I taught kindergarten and first grade—phonics is the way to learn.”

She witnessed an incident at a state-level meeting of union leaders when a teacher stood up to express on behalf of other teachers a disagreement over spending funds collected membership dues on politics. Some leaders and some union activists present at the meeting went up on the stage where the teacher was speaking, surrounding and intimidating her, Friedrichs said.

Teachers at the meeting, including Friedrichs, were completely silenced and terrified, afraid to say anything, she said.

Teachers unions are systematically implementing the 45 goals of the Communist Party that were read into the congressional record nearly 60 years ago, she said.

In 1963, Rep. Albert Sydney Herlong Jr. (D-Fla.) read into the Congressional Record (pdf, pp. A34-A35) a list of communist goals from the book “The Naked Communist” by Cleon Skousen.

Goal No. 17 on the congressional record reads: “Get control of the schools. Use them as transmission belts for socialism and current Communist propaganda. Soften the curriculum. Get control of teachers’ associations. Put the party line in textbooks.”

Radical sex education fulfills goal No. 40, which states: “Discredit the family as an institution. Encourage promiscuity and easy divorce.”