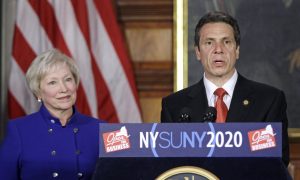 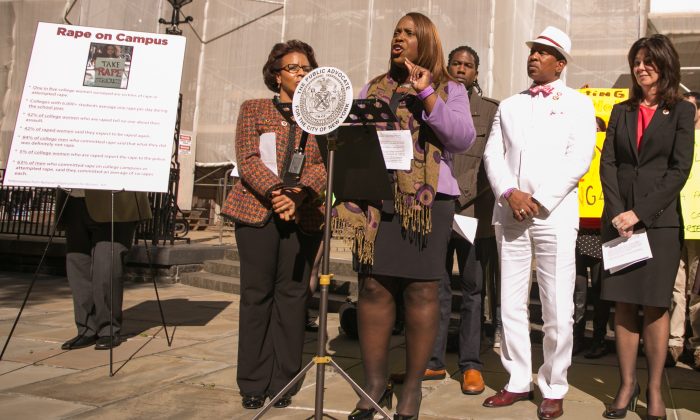 NEW YORK—One in five women attending undergraduate college is a victim of rape or attempted rape, according to statistics by the National Organization for Women.

Amid nationwide concerns over the failure of universities and colleges to deal with student complaints of sexual assault on campus, City Council committees convened on Monday to question local college officials on their sexual assault policies.

A July 2014 survey of 440 four-year colleges conducted by U.S. senator Claire McCaskill found that more than 40 percent of schools had not conducted a single sexual assault investigation in the past five years.

As of mid-October, 85 colleges across the country are being investigated by the U.S. Department of Education for violations of Title IX, a federal law that requires schools to respond appropriately to student complaints of sexual harassment or violence.

The committees mainly focused on how the schools worked with police in reporting sexual assault crimes, how the schools’ disciplinary process dealt with perpetrators, and whether the schools had policies clearly stating the definition of sexual consent.

CUNY, Columbia, and NYU all noted that they have revised their sexual assault policies recently to clearly state that sexual consent requires affirmative agreement to sexual activity, that silence does not constitute consent, and that someone cannot give consent under the influence of drugs, alcohol, or other impairments to judgment.

The schools also put together more specialized staff to specifically handle sexual assault cases, or provided new training to faculty and staff on what constitutes sexual crimes. At CUNY, for example, staff was given free access to an online training course on sexual harassment prevention.

Incoming students at these schools are now required to attend an orientation session where they are informed of the school’s policy and where to get help, should they become a victim of sexual violence.

When chair of the public safety committee Vanessa Gibson asked the schools whether they had established protocols with local police on reporting sexual crimes, CUNY and Columbia said they did, while NYU said they didn’t have a formal agreement but worked with a liaison unit at the local precinct.

CUNY stated that their policy is to encourage victims to report their sexual assault cases to the police. For all sexual crimes that are reported to the school soon after it happened or while it’s ongoing, CUNY calls 911.

Columbia recommends students to call its public safety department so that it can refer students to the local precinct’s special victims unit. It believes schools are able to accommodate student victims who may need changes in housing or exam schedules.

When it came to CUNY’s disciplinary process, Councilmember Helen Rosenthal repeatedly pressed its officials to state how many students so far had been disciplined after investigations concluded that they were a sexual assault perpetrator.

CUNY deputy general counsel Jane Sovern said she did not have official data, but she personally recalls at least one case where the student was expelled.

At Columbia, a September report indicated that between July 2013 and June 2014, no complaints for sexual assault involving non-consensual intercourse were substantiated.

For other sexual misconduct such as touching, sexual harassment, and intimate partner violence, the school imposed sanctions such as suspension, disciplinary probation, and ineligibility for future enrollment in the university’s graduate programs.