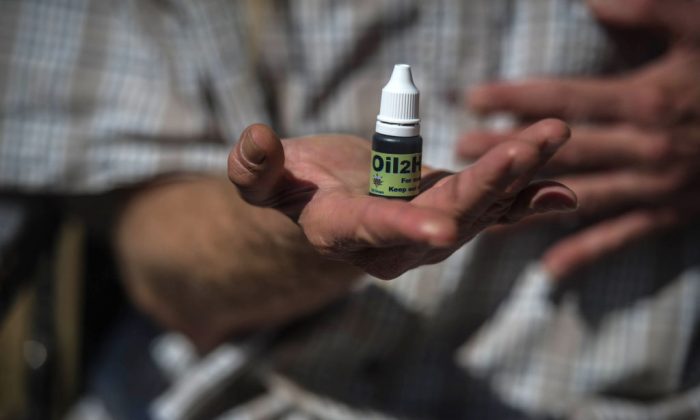 South African Gerd Bader, affected by Multiple Sclerosis and who manufactures concentrated cannabis oil, shows a flacon with oil produced from his plants at his home on July 18, 2017 in Johannesburg, South Africa. (Mujahid Safodien/AFP/Getty Images)
UK

The mother of a severely epileptic boy who was taking cannabis oil to control his seizures has been told the oil will not be returned after it was confiscated at Heathrow Airport.

Charlotte Caldwell was stopped by customs officers after she tried to bring the oil into the UK from Canada.

She said she needed the oil for her 12-year-old son Billy, who was having up to 100 epileptic seizures a day.

In 2017, Billy became the first child to be prescribed medicinal cannabis oil through Britain’s National Health Service. He then went 250 days without a seizure, according to the Belfast Telegraph, but his doctor was ordered by the Home Office to not renew Billy’s subscription.

Caldwell met with Minister of State Nick Hurd, and asked him to give her son’s oil back, but Hurd refused.

Caldwell was not charged by police and has vowed to go back to Canada to bring more oil back.

“We will not stop, we are not going to give up,” she said at a news conference. “We have love, hope, faith for our kids and we are going to continue.”

Caldwell described the medicinal oil as “a small bottle of oil that’s keeping my son alive,” adding that, “my son has a right to have his anti-epileptic medication in his country, in his own home.”

She continued, “It’s Billy’s anti-epileptic medication that Nick Hurd has taken away. It’s not some sort of joint full of recreational cannabis.”

Caldwell said she worries that Billy’s seizures would “eventually kill” him. She said he would miss his dose for the first time in 19 months.

On June 12, it appeared that her worries were realized. On a Facebook page called “Keep Billy Alive” a video was posted of what looked like Billy having a seizure. The video was captioned with the text, “1.01 a.m. this morning, Billy had a seizure.”

Billy was first given the treatment in the United States, where cannabis oil (CBD oil) is legal in certain states.

Two chemicals found in the resin of cannabis are key to its effects: CBD and Tetrahydrocannabinol (THC).

In the UK, the Medicines and Healthcare Products Regulatory Agency recognizes CBD oils as medicines, as long as they do not contain THC.

However, CBD oil has not yet been specifically granted a license as a medicine, and can only be prescribed under special circumstances.

Billy’s local doctor, Brendan O’Hare, recently met with Home Office officials and was told to stop prescribing the oil, according to the BBC.

A Home Office spokesperson told BBC, “The Home Office is sympathetic to the difficult and rare situation that Billy and his family are faced with. The policing minister met Ms. Caldwell and advised her that despite these extremely difficult circumstances, it is unlawful to possess Schedule 1 drugs such as those seized at the border this morning without a license.”

“The minister urged the family to explore licensing options with the Department of Health Northern Ireland,” the spokesperson added.

Despite the legal status of cannabis in the country, the UK is the world’s largest producer and exporter of cannabis for scientific and medical use, according to the Guardian.

Earlier this year, a 6-year-old epileptic boy was denied access to medical cannabis because the drug “cannot be practically prescribed, administered, or supplied to the public,” according to the Home Office’s ruling at the time.