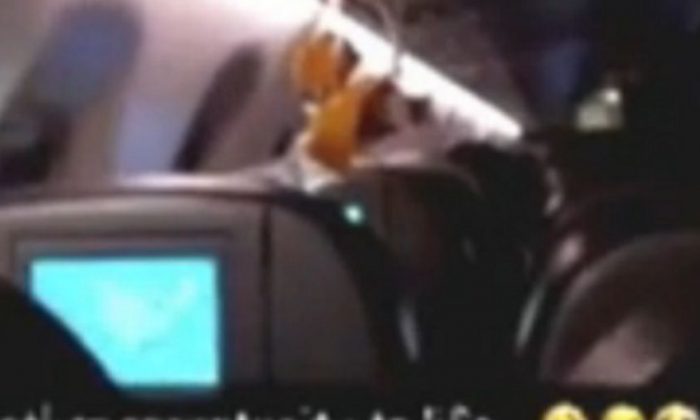 Eight people were injured when a JetBlue flight to Orlando hit a patch of turbulence.

The flight, which was coming from San Juan, Puerto Rico, was heading to Orlando when it crossed paths with a storm. During the incident, the refrigerator exploded, according to local reports.

Cabin crew were making their way down the aisle with drinks and snacks when the aircraft started to shake.

Medics came on board and treated the eight people who were hurt, Reuters reported.

Footage of the turbulence was captured on camera, uploaded to Snapchat by passenger Veronica Hernandez Torres, who was traveling to Florida with her daughter and mother.

Torres told Univision that it kept getting worse and worse.

“That was just the time it got worse, the drinks are all tacked above and we were asked to quickly buckle our seat belts,” she told the broadcaster.

“The hostess ran to sit and went to the back, it was like a movie,” she added. “The belts were buckled and at that moment the plane (hit turbulence) and the oxygen systems came down. The doors of refrigerators exploded—it was horrible.”

JetBlue released a statement that read, “JetBlue flight 1134 experienced turbulence while en route from San Juan, Puerto Rico, to Orlando. The flight arrived in Orlando at 8:52 p.m. ET. Medical personnel met the aircraft upon arrival to assist customers, and eight customers were transported to a local hospital for further evaluation,” WFTV reported.