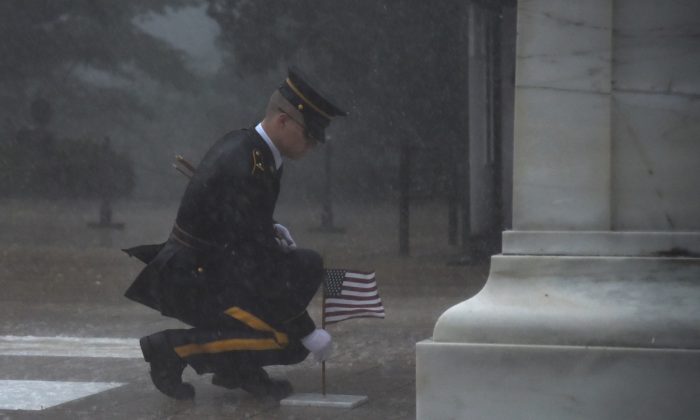 A sentinel endures a severe thunderstorm to place a small American flag at the grave of an unknown soldier. (U.S. Army photo by Sgt. Maryam Treece/3d U.S. Infantry Regiment)
US News

A Facebook post showing an “Old Guard” soldier placing a small American flag at the grave of an unknown soldier during a severe thunderstorm has struck a massive chord with people ahead of Memorial Day.

The Third US Infantry Regiment or The Old Guard conducts memorial affairs in tribute of fallen soldiers, and ceremonies and special events to represent the army.

The Old Guard shared pictures of a soldier putting a small flag at the grave of an unknown soldier on May 24 on its Facebook page that has since gained 154,000 likes and 144,000 shares at the time of this publication.

“Yesterday, torrential rain and drastic wind gusts overcame America’s most hallowed grounds. Visitors ran for cover. News media piled into vehicles together. The streets flooded. Trees as old as the cemetery itself broke at the trunk and came crashing down. But America’s Regiment endured,” the post said.

The Old Guards called it an extraordinary “display of discipline and dedication to duty.”

“With only a few watching from cover, a Tomb Sentinel approached the Unknowns with U.S. flags in hand. As thunder shook the ground and rains washed down without abandon, the Tomb Sentinel pierced through the elements with breath-taking precision. He knelt and placed the flags in honor of the Unknowns,” the post said.

The soldier was recognized as Tyler Mckee by his mother who responded to the post. “You make a mom proud! Thank you for representing those who were there before you and gave their lives for our freedom. Your brother #640 also showed the same honor and respect,” wrote Julie Dabulewicz McKee of Florida.

People also showed their appreciation to the soldier’s mother for the values that she instilled in him. “Julie Dabulewicz McKee you raised a very good young man thank you for doing so and my heartfelt thanks to him for serving,” commented Natalie Leiphardt.

People also commented that it was refreshing to see such good values in today’s time.

“Honor, respect, dedication, sacrifice. These words are so rarely used or seen in today’s world. It is so refreshing to see them in action. Those who don’t know what they mean, I dare you to look them up!!!!?” commented Marysue Blair.

The Old Guard’s also shared about other upcoming performances on Memorial Day.

“The U.S. Army Drill Team and The United States Army Old Guard Fife and Drum Corps will be performing in Chicago as a part of the Memorial Day festivities. We’ll be going live at 10:30 am and 12:00 pm Central Time,” another post said.

The Old Guards are the oldest active-duty infantry unit in the army, serving the United States since 1784, said a release on its website.

It’s also the escort to the President and the official Army Honor Guard since the Second World War. It is responsible for security at Washington in times of an emergency.

“Soldiers of The Old Guard maintain a 24-hour vigil at the Tomb of the Unknowns, provide military funeral escorts at Arlington National Cemetery and participate in parades at Fort Myer and Fort Lesley J. McNair,” said the release.

It annually participates in over 6,000 ceremonies—about 16 every day.

“A further distinction of The Old Guard is the time-honored custom of passing in review with fixed bayonets at all parades. This practice, officially sanctioned by the War Department in 1922, dates to the Mexican War in 1847 when the 3rd Infantry led a successful bayonet charge against the enemy at Cerro Gordo,” said the release.

“Today, this distinction is still reserved for The Old Guard alone.”