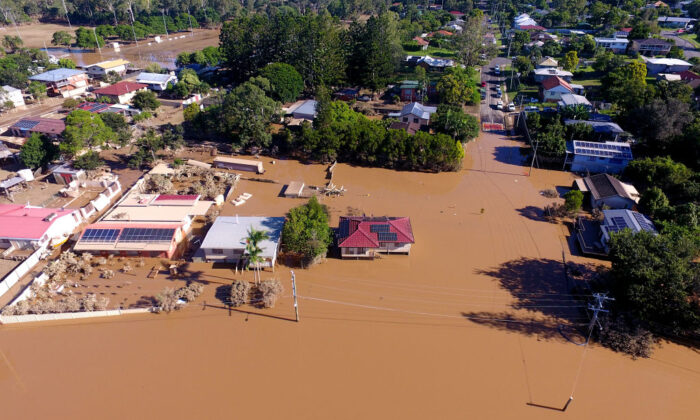 Properties in the suburb of Goodna in the far south-western outskirts of Brisbane are seen inundated by flood waters in Brisbane, Australiaon March 01, 2022 . (Photo by Bradley Kanaris/Getty Images)
Australia

Severe storms affecting south-east Queensland (QLD) have abated for the moment, but the Bureau of Meteorology (BOM) has warned that further storms remain a risk throughout Thursday, with the potential for flash and localised flooding.

This comes as floods have devastated the southeast of the state and northeast of New South Wales over the past week, with 14 people dead, many missing, and thousands of homes and businesses destroyed.

BOM had issued a severe thunderstorm warning on Wednesday, saying the storm had the potential to bring a return of flash and riverine flooding to southeast Queensland over the coming days.

The thunderstorms were forecast to produce locally intense rainfall, destructive winds, and large hail around southeast QLD from late Wednesday evening, which would likely persist into the weekend and potentially cause water to rise in local creeks and streams that respond quickly to heavy, short duration rainfall.

In addition, a 93 kilometre (58 mile) per hour wind gust was recorded at Dalby Airport at 7:15 pm, and large hail around 5 to 6cm in diameter was recorded just west of Inglewood around 12:10 am.

However, BOM issued a cancellation of Severe Thunderstorm Warning at 8:11 a.m. on Thursday, saying that “Severe thunderstorms are no longer affecting the south-east QLD area.”

This is welcome news for residents, many of whom have returned to their homes to assess the damage and begin the daunting task of cleaning up.

One resident in Brisbane’s west said returning home was confronting because of both the sight and putrid smell, ABC reported.

“We’re just trying to wrap our heads around it,” Lauraine Ormond said.

Despite her house being raised off the ground, as many are in the area, the flood was so severe that it rose through the floorboards, taking several days to subside.

Muddy water reached the height of her windowsills, leaving furniture, appliances and belongings floating around the house.

When Ormand and her partner returned to the house they were confronted with a chaotic mess of damaged possessions caked in mud.

Ormand said that they would not be able to clean up alone.

“People’s [help is] the big thing because we’ve got lots of heavy stuff,” she said.

While the storms have abated, it may be temporary, as BOM have forecast that severe thunderstorms are likely between Bundaberg and the Sunshine Coast, and also still possible in south-east QLD, potentially bringing heavy rain, damaging winds, and large hail.

While river levels are unlikely to reach the peaks seen over the weekend through to Tuesday, there is still a risk of flash and localised flooding should further storms hit.