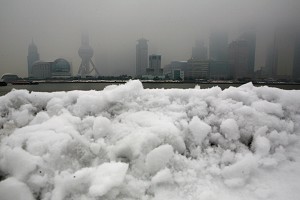 Snow sits near the skyline of the Lujiazui Financial District in Shanghai, China. Due to an ice disaster in southern China, the power transmission from other provinces to Guangdong has been greatly reduced. (China Photos/Getty Images)
China

Severe Power Shortage for Guangdong Province Due To Ice Damage

BEIJING—On February 11, 2008, the Xinhua Net (China's official news agency) reported that due to an ice disaster in southern China, the power transmission from other provinces to Guangdong has been greatly reduced. Combined with increased power demand after the Chinese New Year, the expected power supply for the province this year looks grim.

The report cited information from the Guangdong Power Grid Company that their transmission equipment connecting to Southern China's main grid was damaged during the recent ice disaster. The damage is so extensive that it will take some time before it is fully restored. The obstruction led to a nearly 80 million kilowatts reduction of power to Guangdong—14.3 percent of the peak load in the province.

In order to reduce the adverse impact from the serious power shortage on Guangdong's economic development this year, the China State Electricity Regulatory Commission required that the provincial grid strengthen management on power demand, to reduce power usage from high energy consuming companies, high emission companies and superfluous industries. Furthermore, they ordered the power cut to companies not meeting industrial policies or with construction violations, as well as companies slated for elimination. The limited power resources are to be redirected to the most critical areas.

It has been reported that electricity generating companies inside the Guangdong Province are doing everything possible to increase coal storage for power generation and exploit the potential for generating more electricity.

However, because Guangdong is far from China's coal production areas, the long distance transportation involves many steps. Moreover, the coal resource relies entirely on imports from other provinces and countries; hence, the coal supply for power production is limited by many factors. Add to this is the low level of coal storage among electricity generating companies, which ultimately offer little hope to Guangdong's energy crisis.