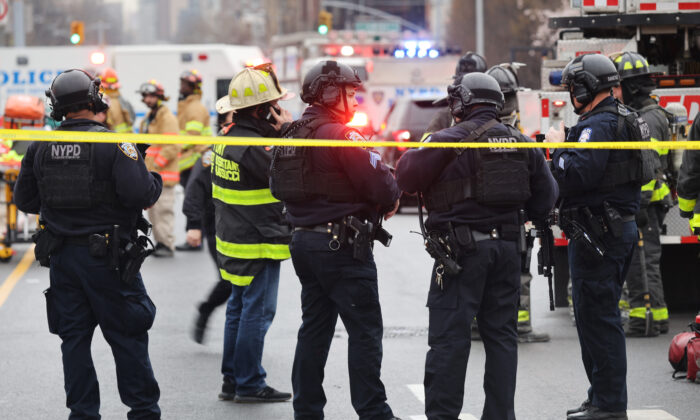 Police and emergency responders gather at the site of a reported shooting of multiple people outside of the 36 St subway station in the Brooklyn borough of New York City on April 12, 2022. (Spencer Platt/Getty Images)
Crime and Incidents

Several people were shot and several explosive devices were reportedly found at a subway station in Brooklyn on Tuesday, said the Fire Department of New York.

The fire agency said it received a call about smoke in the 36th Street subway station in the Sunset Park neighborhood at around 8:30 a.m., according to local media.

An Epoch Times staff member who was on the scene saw that several people were injured at the location.

Officials said approximately 16 people were wounded, including 10 who were struck by bullets. The suspect was described by authorities as a black male standing 5’5″. He was seen wearing an green construction-style vest and a gas mask.

“Either shots or a bomb went off at 36th Street,” witness Roddy Broke said via Twitter. “Scariest moment of my life, man.”

“I was heading into 36th Street Station in Brooklyn when a young guy who was bleeding from the legs said people were injured and bleeding,” witness Conrad Aderer told the New York Daily News.

Juliana Fonda, a broadcast engineer, told local media that she heard shots one car over as she was on the N train.

“People were pounding and looking behind them, running, trying to get on to the train,” Fonda said. “The door locked between cars and the people behind us, there were a lot of loud pops and there was smoke in the other car.”

The NYPD advised people to avoid the vicinity of 36th Street and 4th Avenue as an investigation is underway.

“In regard to the multiple people shot at the 36th Street subway station in Brooklyn, there are NO active explosive devices at this time,” NYPD News wrote in an update 9:50 a.m. ET. “Any witnesses are asked to call @NYPDTips at #800577TIPS. Please stay clear of the area. More provided information when available.”

The New York City Transit Authority said that the D, N, and R train service is suspended in Brooklyn and areas in Manhattan due to the shooting and investigation.

“There is no D/N/R service in Brooklyn and some stations in Manhattan. Expect major delays on B/D/F N/Q/R trains. Take alternate subway or bus lines. What’s Happening? There is a major disruption to service while NYPD responds to an incident at 36 St.,” said the Transit Authority in a service alert.

The identity of the suspect—or suspects—has not been disclosed. It’s also not clear if they have been apprehended.

No other details were immediately provided by the NYPD or FDNY. The Epoch Times has contacted the NYPD for comment.

New York Gov. Kathy Hochul wrote on Twitter that she has been briefed about the shooting in Brooklyn and will work with the Metropolitan Transportation Authority (MTA) and other agencies.