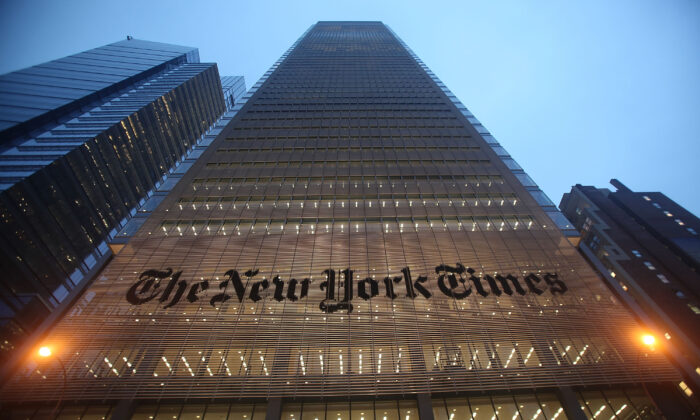 The New York Times' masthead is displayed in front of the midtown headquarters in New York City on Dec. 7, 2009. (Mario Tama/Getty Images)
By Isabel van Brugen

Current employees at the New York Times who formerly worked for the Chinese state-run media outlet include; Jonah Kessel, Director of Cinematography at the Times; Diarmuid McDermott, a current Staff Editor and Designer at the outlet; and Europe culture reporter Alex Marshall, the National Pulse found.

In now-deleted Twitter posts, Kessel, who took on the role of China Daily’s Creative Director from July 2009 to November 2010, wrote that working for the CCP sometimes has its “benefits.” He also mentioned that he was “psyched” for starting the role, which included “redesigning” the propaganda arm of the CCP.

He had disclosed in several posts that he was “working for” and “getting paid” by Chinese state media.

“You know you work for the PRC [The People’s Republic of China] when the first word that comes to your mind when asked to describe your work place is ‘harmonious’ #china,” Kessel wrote in a Twitter post in November 2009.

According to McDermott’s LinkedIn profile and personal website, he worked as editor and designer for China Daily in a Hong Kong-based role for eight years—from November 2012 to November last year. He assumed the same role at the NY Times last year, and is still based in Hong Kong.

He revamped China Daily’s “Asia Weekly” publication, which, according to his profile, involved “Copy editing; Rewriting raw copy; Designing layout and graphics; Sourcing news stories and pictures; Developing and maintaining a web presence across multiple platforms; Outputting pages for printers across the region.”

Marshall was reportedly employed by China Daily as an editor between 2003 and 2004.

The Epoch Times has reached out to the NY Times for comment.

For years, the NY Times has sought expanded access to the Chinese market and accepted millions in advertising revenue from Chinese state-owned media entities.

Records from the U.S. Department of Justice last year show that China Daily paid nearly 19 million dollars to U.S. media companies for advertising and printing expenses over the past four years.

Paid supplements with a pro-Beijing agenda produced by the outlet were published in newspapers such as The Washington Post and The Wall Street Journal.