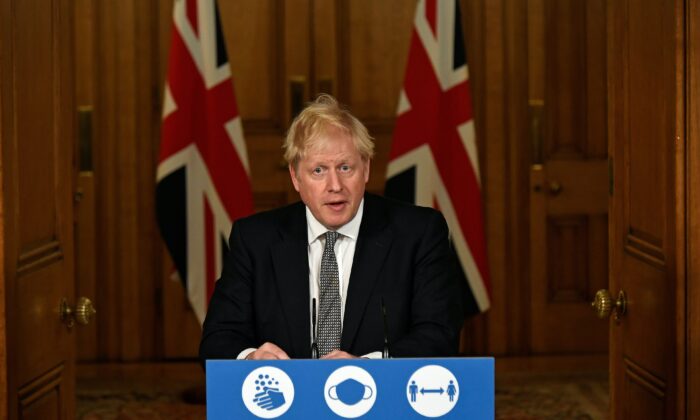 Britain's Prime Minister Boris Johnson gestures as he speaks during a press conference where he announces new restrictions to help combat the coronavirus disease (COVID-19) outbreak, at 10 Downing Street in London, on Oct. 31, 2020. (Alberto Pezzali/Pool via Reuters)
UK

Several More Hurdles to Clear Before Pfizer Vaccine Can Be Used, Johnson Says

UK Prime Minister Boris Johnson said on Monday that one significant hurdle has been cleared on the path to a vaccine for COVID-19, but there were still several more to overcome.

His comments come after the latest results released by New York-based Pfizer and German biotechnology company BioNTech show a vaccine candidate was strongly effective in a large phase 3 study.

Pfizer’s announcement could mean that “we are at the beginning of the end of our troubles,” Johnson said in a press briefing, but emphasised caution.

“So we’ve cleared one significant hurdle, but there are several more to go,” he said.

Johnson said his government is yet to see the full safety data, and the test findings need to be peer reviewed before the vaccine can be approved.

The UK has ordered 40 million doses of the vaccine, and 300 million doses from five other vaccine candidates, Johnson said. He added that once the vaccine is approved, the NHS will lead a programme to distribute it.

The results, released on Monday, were termed the first interim efficacy analysis, and included data from 94 patients who had confirmed cases of COVID-19, the disease caused by the CCP (Chinese Communist Party) virus.

The results were analysed by an independent data monitoring board. They indicate an efficacy rate above 90 percent at seven days after the second dose, Pfizer and BioNTech said. That means protection is achieved 28 days after the first vaccination. The vaccination schedule is two doses.

No serious safety concerns were reported in the interim results.

There are currently no approved vaccines for the CCP virus. Dozens are in development around the world.