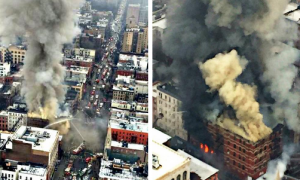 Officer Jennifer Coats, a spokeswoman with the Berkeley Police Department, said many have critical, life-threatening injuries.

Police received a call about the incident shortly before 1 a.m. PDT Tuesday, and when officers arrived they found that the balcony on the fourth floor of the building on Kittredge Street had disintegrated.

Television footage of the scene showed that the fourth-floor balcony fell onto the one on the third floor.

Irish Foreign Minister Charlie Flanagan said he believes all five of those killed are Irish. He said four died at the scene and one in a hospital.

“My heart goes out to the families and loved ones of the deceased and those who have been injured in this appalling accident,” Flanagan said in a statement.

Coats said officers are still investigating and she doesn’t have any information on how it occurred or what the people were doing on the structure at the time.

“We don’t know what happened. Officers on scene are talking with people,” she said.

The building in the heart of downtown Berkeley has apartments in the upper floors and retails shops at ground level. The walkable neighborhood just blocks from the University of California, Berkeley, is dotted with museums, restaurants, coffee shops and chain stores.

Police were working with both fire officials and building inspectors to try to determine what caused the accident, Coats said.

She said she also didn’t have information on the identities of the victims, including their ages and gender.

“We don’t have a lot of specific detail at this point because they (investigators) are still trying to work through it all,” she said in a telephone interview.

The building has apartments in the upper floors and retails shops at ground level.

Flanagan said the Irish consul general in San Francisco would be providing assistance to those affected.