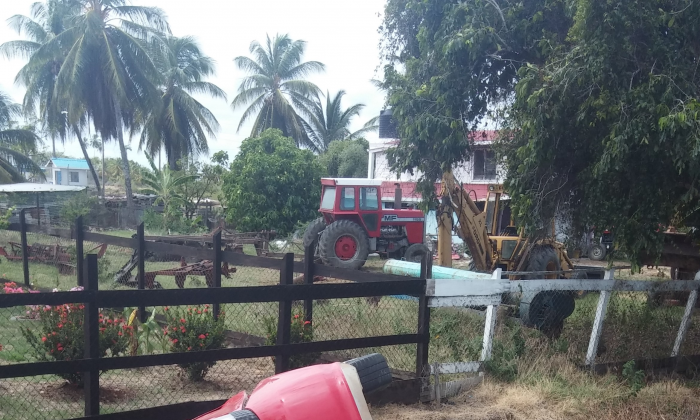 The vehicle that was involved the accident
News

Georgetown, Guyana; – A mid-morning vehicular accident along Guyana’ coastal belt has resulted in the hospitalization of a businessman, his wife, and two teenage children.

According to an eye witness, the businessman, who was driving motor car PPP 588, was proceeding to the East of Berbice (a county in Guyana) at a very fast rate around 10:30hrs when he began to experience difficulties on a perilous bend which stretches for some 200 meters along the highway at Columbia Village in the Mahaicony area.

The witness added that the businessman apparently lost control of the speeding car which then skidded across to a ditch on the other side of the road, and then turning turtle at least three times before it landed on its side next to the walkway of a resident.

Some farmers who were also tending to their rice fields in the same area also confirmed the claims made by the first witness, while adding that two of the occupants were flung from the car as it turned turtle, resulting in possible serious injury to their person.

On the scene, this journalist noticed that one of the teens was unconscious, while the other was screaming as their bloodied parents tried to console them.

Efforts to secure the assistance of a police patrol that was on duty a few hundred meters away failed, thus forcing public spirited persons to place the accident victims in the tray of truck which then sped off in the direction of a district hospital at Mahaicony.

Up to press time, this publication was unable to confirm whether any of the accident victims had succumbed to their injuries.

Guyana police is said to be now investigating the accident.

The South American country, which is mostly link culturally to the Caribbean  has one of the most unsafe road networks in the region.

Its Government has been struggling to expand the country’s road network for several years now, and has promised to take steps aimed at improving traffic safety.