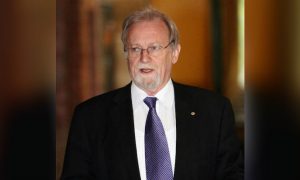 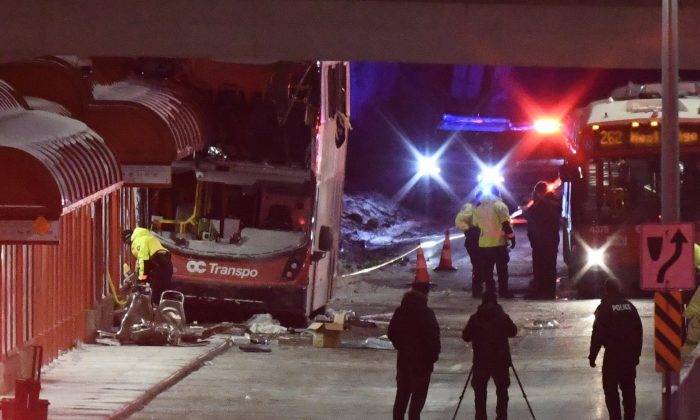 Police and a first responders work at the scene where a double-decker city bus struck a transit shelter in Ottawa, on Jan. 11, 2019. (The Canadian Press/Justin Tang)
Canada

“As a result of the collision we have a number of injuries and some fatalities,” Chief Charles Bordeleau said at the scene, a major bus station west of downtown. He said he didn’t yet have precise numbers.

Photos posted on Twitter showed extensive damage to the front of the bus, with the roof of a shelter well into the vehicle’s second deck.

An obviously distressed woman was seen being wheeled away from the bus on a stretcher by paramedics.

The Ottawa Hospital’s trauma center said it had received nine patients “in critical condition” from the collision.

Emergency responders are on scene at Westboro incident. Scott Street is closed as well as the Transitway between Westboro and Tunney’s Pasture. Churchill Seniors Centre at 345 Richmond Road is open to residents seeking information about family members involved in the collision.

The crash took place at 3:50 p.m., during Friday rush hour, at Westboro station in an urban neighbourhood. Afternoon traffic snarled around the station as dozens of emergency personnel descended on the scene. Police were urging people to avoid the area.

Buses were being detoured as a result of the accident, OC Transpo said.

Ottawa Mayor Jim Watson tweeted he was shocked to hear of the “horrific incident.”

“My first thoughts are with those who have been injured and their families. I have asked staff to ensure all necessary resources are made available to assist them through this difficult time,” he said. “Westboro station is still an active emergency site, and I would ask residents to stay out of the way in order to assist first responders with their work.”

In 2013, an Ottawa bus collided with a Via Rail train in suburban Barrhaven, killing six people.