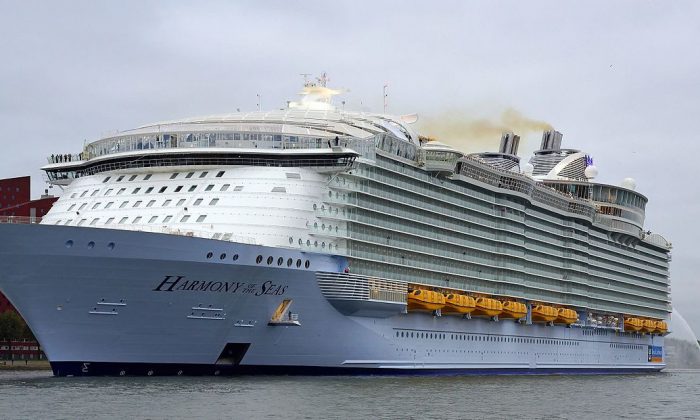 Royal Caribbean' s Harmony of the Seas in the Netherlands in an undated photo (kees torn via Creative Commons Attribution-Share Alike 2.0 Generic license)
US News

Several cruise ships have been forced to alter their itineraries amid civil unrest in Puerto Rico, it was reported.

“Due to demonstrations in Old San Juan, we felt it best to not take our guests there today. I’m sorry for the disappointment,” the Royal Caribbean told a person on Twitter on Tuesday, July 16 after the customer said the ship was rerouted from Cuba to Puerto Rico and the British Virgin Islands.

“That’s fine. But small ship… service not great. Now after being on this tiny boat for 2 days we not can’t go to Puerto Rico. Poor planning on alternative routes & crap service is making me regret all of this,” the woman, Emily Berry, told the firm.

Another person joined in and said, “Thank you RCCL for acting responsibly. I know the safety and security of your guests is the top concern.”

According to Fox News, the cruise operator canceled stops in San Juan, Puerto Rico, on at least two of its cruises. It affected the Empress of the Seas and Harmony of the Seas vessels.

The firm also clarified its decision in another statement.

“Due to the ongoing civil unrest in San Juan, Puerto Rico, we have canceled Harmony of the Seas’ call to San Juan. Harmony will now sail to St. Maarten, her next scheduled port of call. Concern for the safety and wellbeing of our guests and crew members is our top priority,” a Royal Caribbean spokesperson told Fox.

Puerto Rico Governor Ricardo Rossello said on Tuesday he will stay in office despite protests calling for his resignation that turned violent overnight, Reuters reported.

A peaceful demonstration that drew thousands to the streets of San Juan on Monday turned hostile in the evening when protesters and police clashed, injuring 21 law enforcement agents, officials said.

The unrest was cited by a cruise ship company for its decision to cancel a scheduled stop by one of its vessels in the island’s capital city. The political turmoil comes at a critical stage in the U.S. commonwealth’s historic bankruptcy and as its officials seek billions of dollars in funding from the federal government for healthcare and for recovery efforts following devastating hurricanes in 2017.

Protests against Rossello were sparked by leaked controversial and vulgar text messages between the governor and his closest allies and by a federal probe into government corruption on the island.

The Trump administration, which has tangled with Rossello in the past, said the events “prove the president’s concerns about mismanagement, politicization, and corruption have been valid,” according to a statement by White House spokesman Judd Deere.

“My commitment is to keep on working and to make sure that services and the transformations that we’ve embarked in Puerto Rico continue,” the governor told a news conference. He added he is in the process of replacing Christian Sobrino, the island’s chief financial officer and Rossello’s representative on Puerto Rico’s federally created financial oversight board, and Secretary of State Luis Rivera Martin, the government’s second in command.