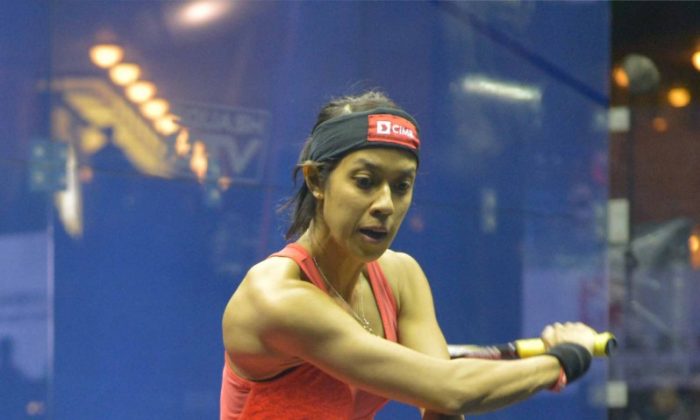 Officials and spectators alike had their hearts in their mouth’s again on Finals night (Sunday Dec 2) of the Cathay Pacific Sun Hung Kai Financial Hong Kong Squash Championship as drizzle started to fall at exactly the wrong moment—as the women’s Final between Nicol David and Camille Serme was scheduled to start.

The venue was the amazing outdoor glass court located on the banks of the famous Victoria Harbour at the HK Cultural Centre Piazza. Similar to the previous night–when the venue had to be changed mid-game of the Men’s first Semi-final due to rain—at 5.45 pm precisely, rain started to fall. Spectators donned raincoats, dryers were set running on court and staff worked continually to dry the floor.

With two International Olympic Committee programme commissioners looking on as they considered squash’s inclusion in the 2020 Games, HK Open organisers would have had some tense moments. The previous night the IOC representatives did not cross the harbour to watch the completion of the men’s Semi-finals.

But, the Tournament Director’s decision to wait to see if the weather would clear paid off as the rain stopped and the first match was able to start at 6.00 pm.

Although stretched at times, David played her normal immaculate game. She turned up the pressure when needed to take the first two games.

Serme put up good resistance playing many good shots and went on to win the third game 11 points to 7—David’s first dropped game in the tournament.

This gave added interest to the spectators who wondered if this was a turning point, but the almost inevitable happened with David winning the fourth game to retain her crown—her seventh win in the Hong Kong Squash Open.

Directly after the game, David acknowledged her opponent’s effort in the match.

“She [Serme] just played a really good match and she was just on fire in the third game. She came on strong and all her shots came in. I was working really hard out there—digging deep to make sure I win that three-one, and no doubt if I let go a little bit more in the fourth, she would have come in and who knows what would happen?” said David.

Unbeaten in Hong Kong for the last eight consecutive years—since winning her first World Championship title in Hong Kong in 2005—the 29-year-old was asked where she still finds the drive and motivation to keep working, keep training and winning. David said that it was the small improvements that she focused on.

“It’s just the game itself with so many aspects. You just keep working on the fine details of improving yourself – making sure everything counts—and also improve just 1 per cent each time in every aspect you’re just going to improve your game and improve yourself as a whole squash player. So, that’s my goal and that is my aim to be a complete squash player.