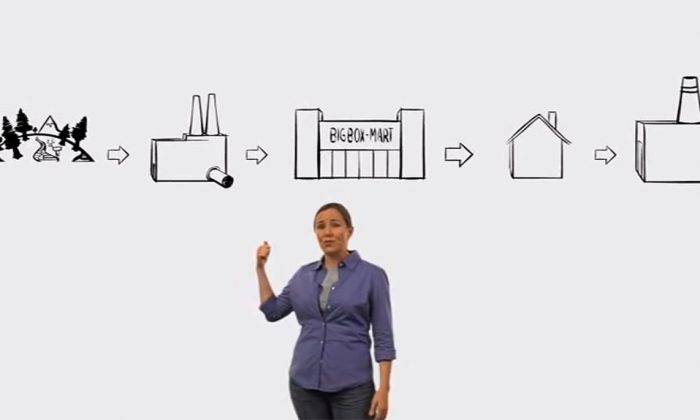 “The Story of Stuff,” originally released in December 2007, is a 20-minute video that talks about the underbelly of production and consumption patterns in the United States, and shows the connection between environmental and social issues.
New York

NEW YORK—New Yorkers are used to seeing piles of trash that come from the deluge of buildings in New York City. This sight however, was shocking for Seattle born Anne Leonard who came to New York to study at Barnard College back in the ’80s.

“I was fascinated with this and I wondered where all this stuff goes,” she told members of ReuseNYC on Thursday.

This very question led her first on a tour of Freshkills on Staten Island, which at that point was a large landfill, and then over the next decade all around the world.

That is what inspired her to make “The Story of Stuff,” a video detailing the lifecycle of the stuff that went viral back in 2007 when it was released.

The video now has over 336,564 views on YouTube and has been seen in every country of the world.

In that first year after it was released Leonard got over 250,000 emails, ranging from people who were aware that patterns of consumption in developed countries are destroying the Earth, to those who had never thought about where their stuff came from or where it went.

While Leonard’s video created awareness about the issue, the trash piles in New York City have not gone down much since the ’80s, if at all.

“We need to work together, not just as better shoppers but as active citizens to change the rules, how our stuff is made, to change business as usual,” she said.

Leonard is now the executive director of Greenpeace, one of the largest environmental organizations in the world.

“Change is not just possible, it is inevitable,” she said.