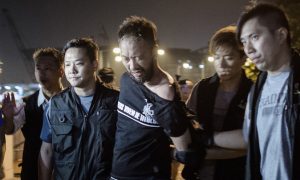 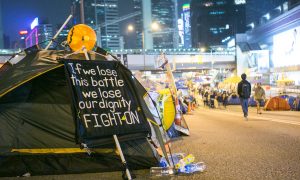 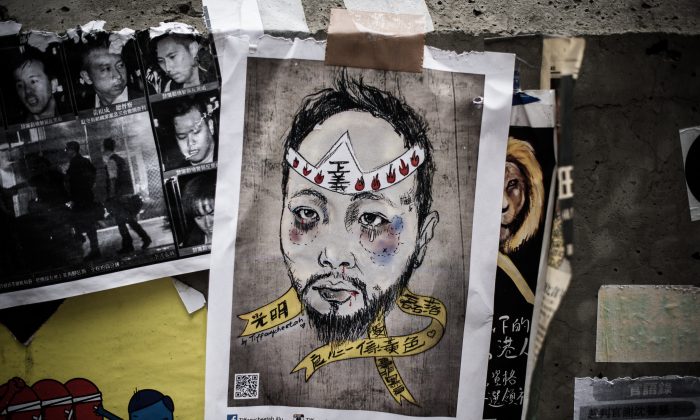 A poster depicting Civic Party member Ken Tsang, who was beaten by plainclothes police officers, is displayed at the main protest site in the Admiralty district of Hong Kong on Oct. 23, 2014. Seven officers involved in the beating were arrested on Nov. 26 following police investigation. (Philippe Lopez/AFP/Getty Images)
China

In what one pro-democracy legislator called a “blatant abuse of power,” Hong Kong police violently cleared pro-democracy protesters from the contested Lung Wo Road in October. Now, seven of those officers, who had been previously identified as beating an unarmed protester as he lay on the ground, have been put under arrest, according to a police statement made on Nov. 26.

The victim, Ken Tsang Kin-chiu, expressed disappointment at the long time—almost one and a half months— taken for police to carry out the investigation, which is being handled by the Complaints Against Police Office Special Investigation Team.

Videos showing the police actions emerged soon after Lung Wo Road, occupied by pro-democracy activists, was cleared in the night of Oct. 15. In one four-minute-long segment broadcast by Hong Kong’s TVB, multiple officers could be seen kicking and stomping on a lone man lying in an alley.

Tsang, who was already handcuffed before being beaten, is a member of the pro-democratic Civic Party and one of a select 1,200 member election committee responsible for voting in the city’s chief executive. As previously reported by Epoch Times, seven officers who took part in the act were identified on Oct. 23. Among their number were a chief inspector, a senior inspector, and several officers assigned to an anti-triad teams.

Tsang sought legal action. A month later, on Nov. 26, police stated that following investigations, the seven officers had been arrested for assault and bodily harm.

“Police reiterate that if any Force member commits illegal acts, Police will handle this seriously and investigation will be conducted in a fair and impartial manner,” the statement reads. Police also claimed that there was no delay in the investigation.

The police statement said that Tsang did not appear at an identification parade scheduled for the same day, and urged Tsang to cooperate with the investigation.

According to a report by the South China Morning Post, Tsang explained his absence, saying that he found the arrangements of the parade unusual and that there were still unresolved legal issues. Tsang said he and his lawyer, Tanya Chan, were willing to cooperate with the investigation, but he still could not feel safe.