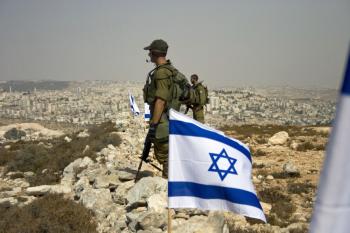 Israeli soldiers guard residents of the town of Efrat from a hilltop, with Bethlehem in the distance. (Genevieve Long/The Epoch Times)
Middle East

For Some Settlers in Israel, They’re Living Their Dream

By Genevieve Belmaker
Print
EFRAT, West Bank—Outside Israel, they are given the blanket label of settlers. But inside Israel, applying one word to the group of Jews who live in the West Bank becomes somewhat inaccurate—or at best incomplete.

That’s because settlers’ reasons for living in an area of Israel that’s technically occupied are as varied as the settlers themselves. Some are extremely religious, some nationalistic, some feel entitled. The ways they live are also varied, with settlements ranging from tiny clusters of several family houses to medium-sized towns of 20,000 or more residents.

Whatever the reason or lifestyle, for many residents of this rugged and breathtaking terrain, settling in the West Bank (or Judea and Samaria as they call it) is the realization of a lifelong dream.

For Sandra and Baruch Orman, who moved to Israel eight weeks ago from Baltimore, Maryland, it’s the culmination of years of planning.

“We’ve been talking about it for nine years,” Mrs. Orman said during a recent hike up a mountainside near their new home in the West Bank. “I think it was the right thing to do. If everyone’s afraid to live here, then the Jewish people wouldn’t have a place to be.”

The Ormans are among 23 families who recently moved to a small town—or settlement—of about 7,000 people in the West Bank called Efrat. For the Ormans and their family, it was also a question of the quality of their existence.

The Orman family and others were part of a welcoming event for new “olim,”(immigrant) families who moved to Israel. The event included a short hike to a hilltop outside of Efrat that the town claims as part of their original municipality. They are in talks with the Israeli government about building 2,500 new units there.

Under a blazing hot midday sun, the group of newcomers, previous residents, and town founders ate hummus and pita, danced, and celebrated their life in Efrat. Each new family received a certificate and cactus to commemorate their arrival with a reminder from Efrat’s town fathers to be like the cactus, “Hard on the outside, soft on the inside.”

Several heavily armed Israeli soldiers with M-16s and armored vehicles, tasked to protect the settlers from residents of nearby Arab villages, stood guard.

For places like Efrat, reasons for expansion and building range from practical—there are serious housing shortages—to ideological. Some complain that it’s almost impossible to find adequate housing. Many area residents refer to the land of Israel and the West Bank as their “historical cradle,” and see building on it as a natural way to lay claim.

For Marcy Stein and her husband Jeremy, who moved from Silver Spring, Maryland, almost two years ago, relocating to Efrat was inevitable.

“It’s coming home,” said Mrs. Stein about living in the region. The couple and their two children had thought about moving to Israel for years, but always found some “made-up reason” not to do it. When they finally did relocate, they found it was more than they’d expected.

“It’s an identity thing—it’s not a religious thing,” said Mrs. Stein about living in Israel and the West Bank.

For the Orman, Stein, and other families of Efrat, the politics of their address don’t escape them, but they don’t completely define them either. They largely see living here as a dream come true.